Excitement was in the air this afternoon as FCJ sisters in Yangon and a few friends gathered for the Welcoming Ceremony of Maria and Cecilia, our first novices from Myanmar who will make their vows tomorrow (8 December 2018).  At the start of the prayer, Clare (who was leading the prayer) reminded us of the historical significance of this event, made extra-special by the presence of Barbara, who was one of the pioneering sisters to start a community in Asia, and of Afra and Agnes, the first two Asian FCJs who made their first vows almost 25 years ago.

There were smiles and tapping of feet as we sang the opening song, “All are Welcome”. We listened to a few readings reminding us of God’s goodness to us in bringing new labourers to the harvest, who would in their own way be God’s compassionate presence in the world. 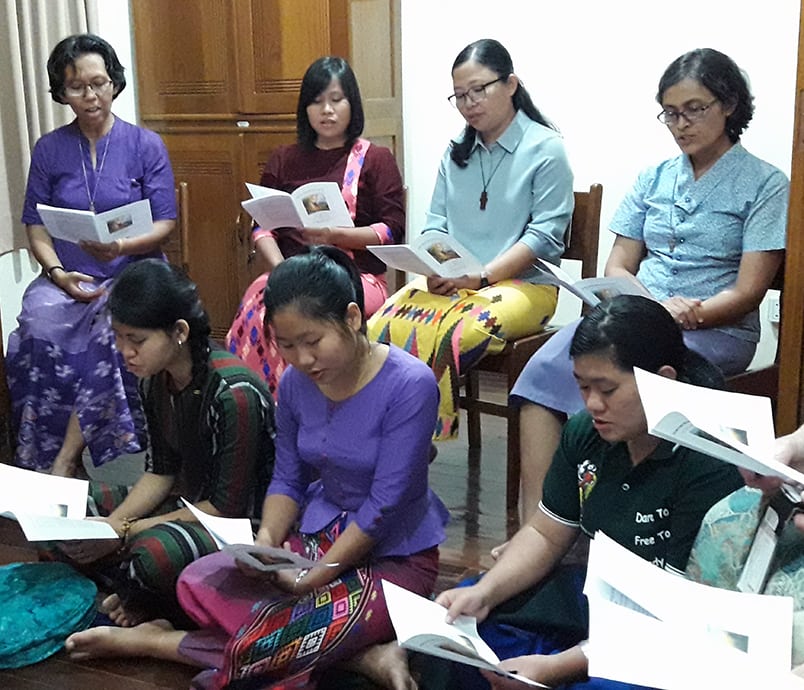 Afra, our Area Leader, then invited Maria and Cecilia to place the crosses they had worn as novices in the sacred space in anticipation of receiving their new FCJ crosses the next day. Afra reminded them that even though they had already journeyed for many years with the FCJs, making first vows was not a “graduation” but a new beginning of journeying together as companions. She encouraged them to walk together in trust that God would complete in them the good work that he had started.

The whole group then said a blessing for Cecilia and Maria, that their companions poverty, gentleness, humility and obedience might always be with them. 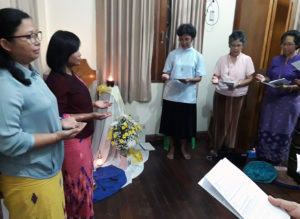 Cecilia said, “What touched me most about the ceremony was when Afra welcomed us into the body of the Society. We really felt like members of the Society in a new way.”

After the prayer we had a delicious supper prepared by Beta and two young women who were staying with the community. There was plenty of laughter and story-telling. After the guests left, last preparations are now ongoing for the big event tomorrow. We’ll keep you posted on how it goes!