Which Pandemic Are You Living?

A reflection by Sr Audrey fcJ on the pandemic of poverty and the impact of the COVID-19 in the poorest people of the world.
First appeared in her blog Surprising Grace

In the past weeks, I have often felt as if I was living in two worlds. When on the phone with family and friends in Singapore, while listening to international news, or joining in various prayer events against COVID-19, I am in a world where anxiety over the COVID pandemic is front and center, with its grievous toll of thousands dying alone, overburdened health systems, and the valiant sufferings of frontliners. This is a world of masks, hand-washing, daily case number updates, and – thankfully – inspiring acts of kindness between people.

Some of the people around me in Metro Manila, though, live in another kind of world. I became acutely aware of this on the first day that we were locked down. Jose (not his real name), a homeless man whom we knew, rang the bell. I had never seen him so terrified. The local officials were asking him to get off the street or be arrested. But where could he go? The street was where he lived and collected recyclables for a living. He needed rent money, and money for food, and to continue his daily medication for tuberculosis. “This is how it always is,” he commented bitterly. “People don’t care about the poor.” I asked if he knew about COVID-19 and how dangerous it was. He waved it off nonchalantly with a hand gesture. “That’s a disease for the rich.”

Nowadays, poor communities here have become more aware of the dangers of COVID-19 and are taking precautions against it. Every informal settlement (or “squatter area”, in colloquial terms) we have visited as part of the local parish’s relief efforts has put up barriers in each of its little alleyways or entry points, usually with a table at which sits a volunteer guard who checks IDs, bars the entry of non-residents, and sprays each person’s hands with alcohol. Everyone wears masks outside their houses, even though physical distancing is usually not possible in the narrow spaces. They know they cannot afford to get sick in a place where healthcare is expensive and often inaccessible to the poor even at the best of times.

The main concern on everyone’s minds in these places, though, is not COVID-19. It is how to survive the lockdown that has so abruptly taken away their livelihoods. “No work, no pay” was a phrase that you heard everywhere after the lockdown announcement. As most of the poor work in the informal sector, the lockdown has meant that they have no way to put food on the table. This is a world where the prospect of falling ill with COVID-19 is far more remote than the urgency of hunger pangs, or of not having milk for one’s children. A few days after the lockdown started, trickles of relief goods started coming in: rice and tinned food, mostly. Some people received financial aid from the government. The private sector, religious groups and NGOs pitched in to help. Incredibly, we have now survived 40 days of lockdown with only one protest by hungry residents in the city who had not received food aid. The mood in each community we have visited has been different: in some, especially when everyone was receiving aid, there was a peaceful atmosphere and a strong sense of community spirit. In others, there was more of a sense of desperation and louder demands. But even in those places I was touched by the humanity of people who advocated for needy neighbours not on distribution lists, and the integrity of those who returned extra vouchers that were accidentally given to them, even though no one would have known the better if they hadn’t.

Poor communities here have faced this crisis so far with the resilience that they have faced all others. But the fact that they have to, as they have always had to, makes me both sad and angry. Dominant media discourse has sometimes tended to “COVID-ize” everything, assuming that the COVID-19 pandemic is most people’s main concern, with numbers of infections, deaths and recoveries as indicators of societies’ success.

But while everyone is susceptible to the disease, the ways in which people experience the pandemic differ widely. There is another, more pervasive pandemic plaguing our world that we don’t so often talk about: the pandemic of poverty and exclusion. For sure, no one is immune from the economic impact of lockdowns, but some people will suffer much more egregiously than others.

If anything, this COVID-19 crisis has just accentuated the plight of the most vulnerable, and exposed more clearly the fault lines that exist in our societies.

I hope the greater awareness of this that we now have will drive us to do something about it. There has been much talk about the pandemic being an opportunity for conversion; a “portal” into a new future (as writer Arundhati Roy puts it). My own country Singapore was initially lauded for its effective response to the pandemic, only to suffer an explosion of new infections later among migrant construction workers living in crowded dormitories. There is still a lot of “us” and “them” talk there (i.e. “the new numbers are only among the foreign workers, but the community is quite safe”), but at least some people are waking up to the fact that “their” fate is entwined with “ours”. No one is safe until we are all safe. 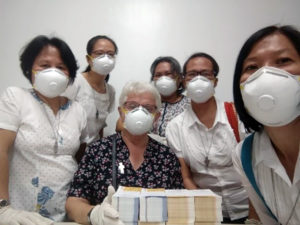 Would that this realization take root, not only within countries but also between them! When family and friends from “developed” countries ask me about the situation where I am and I tell them about people struggling to eat, the first response is usually an embarrassed silence as they suddenly realize that being able to worry about COVID-19 is actually a privilege. Then, thankfully, many step up to the plate with unsolicited donations and offers to help. This is the kind of humanity and sharing that we need on a global scale, which will make cancellation of foreign debt and international cooperation real possibilities. None of us are safe until we are all safe.

What kind of world do we want the portal of this pandemic to open into? Will we let the falling away of our usual blinders “[uncover] once more,” as Pope Francis hopes, “that (blessed) common belonging, of which we cannot be deprived: our belonging as brothers and sisters”?

Lest we feel discouraged by the immensity of the change we have to bring about, perhaps it is good to remember that we can only change ourselves. So I pray for myself first and foremost, for the grace of conversion to live in a way that includes the other, most especially the poor among whom Christ counted himself.

Read other contributions by Audrey fcJ on our website or in her blog Surprising Grace.

An Offering from a Poor Widow: Not Many but Much

An Offering from a Poor Widow

COVID19 and Its Effects – a Poem

As a way of sharing compassion, especially during these challenging times, the Yogyakarta community frequently hang simple packages of food on their fence with a remark, “Free groceries. Please take it if you need it.” Read more... ... See MoreSee Less

An Offering from a Poor Widow - Faithful Companions of Jesus

As a way of sharing compassion, sometimes we hang simple packages of food on our fence with a remark, “Free groceries. Please take it if you need it.”
View Comments