A Companion for Our Journey

During our time in Calgary at the FCJ General Chapter 2019 we have had the joy of welcoming Fr. Peter Bisson SJ.  He led us in the 6-day pre-Chapter retreat. Fr. Peter’s talks during our retreat helped us to move from a stance of “I” to “WE” so that we could enter more easily into communal discernment.  Fr. Peter has celebrated Eucharist for us each day and his reflections at the homily have been entertaining, insightful, helpful and hopeful. He has been generously available to anyone who asked.  We have enjoyed his company at meals, and he has entered into our times of joy and celebration. We are grateful for Peter’s sensitive and respectful presence among us. 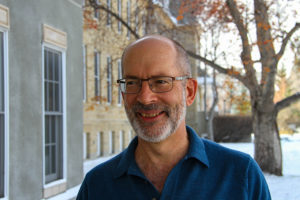 Fr. Peter comes from a bilingual, bicultural town in New Brunswick, a Province of Canada. He entered the Jesuits in 1983 after obtaining degrees in Humanities and Religious Studies.  He did his doctorate in Theology at the Gregorian University in Rome on the Jesuits’ commitment to Social Justice.  Back in Canada, he taught at university for about six years and, with others, worked on rejuvenating his Jesuit Province’s social apostolate and its use of communal discernment.

After returning from the 35th General Congregation of the Society of Jesus in 2008, he became Socius to the new Provincial of his Province and together they moved the Provincial residence from an upper middle-class neighbourhood to a poor downtown area of Toronto.

In 2012, Fr. Peter became Provincial of the English-speaking Jesuit Province in Canada.  As provincial, he strongly promoted reconciliation with indigenous people, as well as reconciliation between English and French-Canadian Jesuits.  (These two Jesuit Provinces became one in 2018).  In his leadership, he steadfastly encouraged communal discernment as a Way of Proceeding, collaboration with lay people and a stronger ecological commitment.  After a sabbatical, his new mission is Assistant for Indigenous Relations to the new Canadian Jesuit Provincial.