Twenty four FCJ Sisters in Asia were gathered in the first Asia Assembly of the FCJ Society from November 1st – 3rd 2018, at Sarasvita FCJ Centre in Yogyakarta, Indonesia. This memorable Assembly for Asia was facilitated by Patricia Binchy, FCJ, on of the General Assistants in the FCJ Society.

Sr. Afra, the leader in Asia, spoke from the heart as she welcomed all and followed by a beautiful opening ritual.  The sisters were shown a videoed speech from Sr Claire Sykes FCJ, the General Leader of the Faithful Companions of Jesus, which brought a sense of unity across the Society.

The Assembly was coloured by personal as well as group reflections, sharing in  small groups as well as in the larger  group. It invited each sister to journey together in the spirit of the theme: “…to more love, more union and more compassionate solidarity.”

On the last day the sisters gathered in local community groups to find particular ways to ever strengthen our community life in the light of all we had heard at the Assembly.

The Assembly was closed with some beautiful words of thanks by Sr. Afra followed by a missioning prayer during which we committed ourselves to go out into the world and live with more love, more union and more compassionate solidarity.

No FCJ gathering is complete without a social evening.  The social night was filled with games, dances and songs as well as laughter. 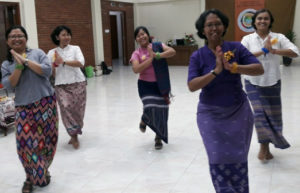