FCJ Refugee Centre in Toronto serves refugees and others at risk due to their immigration status, and welcomes anyone asking for advice, counsel and support regarding their refugee or immigration claim process. The Centre addresses systemic issues that newly arrived refugee claimants face in Canada including lack of resources, marginalization, and discrimination.

The Centre recently held their annual Street Party, celebrating not only their neighbourhood’s diversity – but also Toronto’s, as well as Canada’s – welcoming arms. Among clients, sister organizations, neighbours, friends and other FCJ community members, they celebrated diversity. 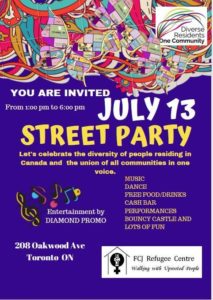 They have also recently published their 2018 Annual Report. Below are the reports words of introduction by the Centre’s co-directors, Francisco Rico and Loly Rico.

We are very grateful to all our supporters for helping us to keep walking with refugees and other precarious populations during 2018. Thanks to you we were able to provide information for refugee claimants and for people who need support in regards to their immigration status and how they can further their situation in Canada.

Access to Education was one of the main achievements for us. We were able to send 17 youth with precarious immigration status to post-secondary education. In general the FCJ Youth Network and the Access to Education team have had an exceptional year, and look forward to the new projects on 2019.

The increase in the number of people arriving in Toronto continued to impact FCJ Refugee Centre and the City in general. The pressures on the City’s emergency shelter system included an increased number of refugee claimants needing shelter during 2018.We continued working with the Refugee Houses, the City of Toronto, refugees and migrants to find shelter. Also we partnered with St. Clair Multi-Faith Affordable Housing, we were able to secure funding for a housing worker and a housing allowance. We were able to accommodate five families, one of which was a group of five young siblings from Somalia. In our own houses we managed to shelter 50 women and 6 children in 2018. The majority of them were from Uganda, Nigeria, Colombia, Kenya, Mexico, Cuba, Croatia, and Egypt.

Another large program that we keep running is the Primary Care Clinic, serving people who don’t have access to healthcare. We had a psychiatrist assisting people with mental health issues. The psychiatrist was also providing refugee claimants with psychological reports and assessments for their claim.

Public education and the accessibility of information is a key part of the services we provide. The programs included workshops about human trafficking given in rural areas. FCJ has expanded the anti-human trafficking network, and one of our most successful services was the Migrant Worker’s Mobile program. We have a phone number so migrant workers can communicate and contact us directly. We have been helping people mostly who are victims of labour trafficking, and we do this through trainings, outreach, and working with a network of other organizations throughout Ontario.

We want to mention that among the many complicated cases we were supporting in 2018, one particular challenging case was a woman who was a victim of sexual exploitation, where she almost lost custody of her son. FCJ helped her gain access to essential services and assisted her in creating a report against the trafficker.

The main challenge for FCJ Refugee Centre is funding, as we don’t receive funding from the Federal government, and our main funds come from donations from religious congregation, grants from foundations, and individual donations. Since the provincial government changed, their priorities changed as well. Changes in Ontario Works affected people having access to social assistance, changes to Legal Aid greatly diminished people’s access to legal representation, changes for services for youth affected how we can serve refugee and migrant youth. While funding is one of our primary challenges, we were able to end 2018 with a surplus, which was one of our main accomplishments. This was the first time in several years that we were able to do this, and with a large amount of fundraising we were able to make 2018 a year with healthy finances for the organization. Thank you for all your support!