Sr Christine fcJ belongs to a group called Neighbours In Poplar, a group of people of all ages from all sorts of social and cultural backgrounds representing the faith and non-faith groups in Tower Hamlets, in the East End of London. Last year they celebrated their 50th birthday with their older folk and volunteers and they were honoured with the Queen’s Award for Voluntary Service, the highest award a voluntary group can receive in the UK.

Neighbours in Poplar, led by Sr Christine, has responded energetically and creatively to the many and varying needs in Poplar for over 50 years. It is no surprise then that she and a team of people collaborating with her have been active in reaching out to elderly and vulnerable people during this time of COVID-19. Together over the past month they have cooked and delivered 1000 fresh meals to folks across the Borough, delivered over 300 bags of shopping and medications, and made hundreds of phone calls to people who are alone, many suffering from mental distress. They have been joined by their Bengali MP, the Chair of the local Mosque and the Church of England team Vicar, „all in it together”!

Over the past six weeks, Sr Katherine, fcJ has joined the team of volunteers. She writes: 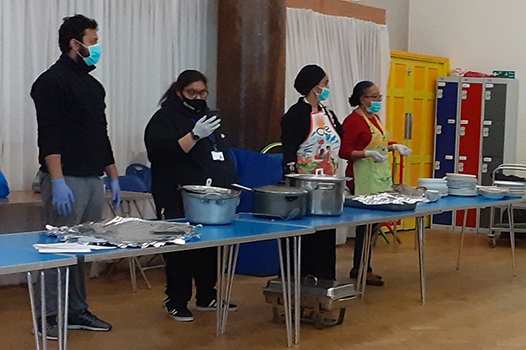 I was happy to join the volunteers on Tuesdays, Fridays and Sundays and enjoyed carving the roast on Sundays for over 90 dinners.  Meals are cooked by the Neighbours in Poplar staff and delivered by volunteers, parents with their children, young and not so young, women and men from all faith communities in the area. Some go on foot, a number have bicycles, others use motorbikes or cars as they cover quite a large area in and beyond Poplar. I am grateful for the community car which enables me to drive to Bow and Mile End. I usually deliver meals to the same people and I find we are developing a strong bond as time goes on although our conversations are short as we stand two metres apart! One man I visit has no one to shop for him so it is good to be able to bring the few groceries he needs each week.

Christine and her team, shop, prepare and cook the meals in St. Matthias Community Centre. Donors have been generous in providing food and money. FCJ Sisters also support Christine financially. A group of Scout Mums arrive regularly with freshly baked cakes. Yesterday, the 1000th meal was taken by two young cyclists who have come faithfully to volunteer three times a week since March 24 . [Featured in top photo with Sr Christine.]

Volunteers arrive and observe strict social distancing as they wait in line to collect their meals. I have appreciated the camaraderie and connection which has developed among the volunteers while staying two metres apart. Most of us did not know each other before this experience.

Parcels of food are also provided for those who need them and to date, volunteers have delivered 343 bags of groceries and medications prescribed by pharmacists. Some volunteers have become phone buddies and over 360 phone calls have been made to those who feel isolated and cut off from family and friends.

Sr Christine has written to the volunteers asking how they might keep this community spirit and practical support going into September. She says:

We are particularly concerned about what happens when life goes back to „normal” and are trying to raise funds so that the outreach and support work can continue. Far too many people of all ages are living in igloos far from families and friends, left with very poor life quality, just hoping to die. Housing, city living costs and our general self-absorption have contributed to all of this. The current pandemic has enabled many young and old, to discover the goodness inherent in others. We pray this will continue.