Pastoral Care through the Eyes of Charlie

Liz, fcJ reflects on her ministry of pastoral care through the eyes of her companion Charlie.

Charlie came into my life as a gift from God in April 2018. Charlie has enabled my world to open wider with many encounters and shown me how I can use my pastoral skills as we venture out daily. Through a friendly smile, a nod of the head, a greeting shared or a dog licking you, a whole new world awaits. Since Charlie draws people to himself, he allows me to be part of this interaction. These people then often become part of my prayer at night.

Charlie has large dark brown eyes. It is through his eyes that he will take you through my life as a a Faithful Companion of Jesus during this time of COVID-19. 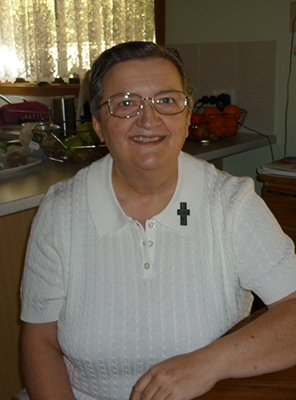 Charlie considered himself one of the lucky ones as he wasn’t affected by the restriction to stay at home. He was free to explore the great outdoors and meet loads of new friends who decided to take up walking during this time. I was lucky to part of his journey.

As Charlie hurries along, he stops to sniff the green, lush blades of grass. The owner of the property comes across, admiring Charlie. He steps back and allows me to interact with the lady. As the conversation progresses, she reveals how she has been petrified about catching the virus and virtually has become a recluse in her own home. She is dreading the day when the restrictions are lifted as she feels safe within her own home. I listen and give encouragement to the lady to take each day as it comes.

A new day dawns. Charlie plays in the bundle of autumn leaves that have been recently raked. The owner comes out to pat Charlie which he gladly obliges as compliments are lavished upon him. The gentleman, whose name is Jimmy, gets talking and reveals how his wife has given up with life. She no longer goes for walks nor ventures outside. She is fearful of anymore surgery on her stiff knee so continues to complain to her husband who puts up with her groaning. His mate appears and we depart.

Walking along our street I meet Tom, Jimmy’s mate. He chatted away to me, patting Charlie at the same time. He revealed that he has been in his home for over fifty years having lost his wife forty -six years ago. He was at bowls one day setting up for the afternoon competition, when he decided to have a break and return home. As he opened his front door he called out to his wife. Assuming she was out in the backyard he walked down the main corridor of the house. As he passed their bedroom, there was his beautiful wife, lying on the floor. He phoned his son who lived around the corner. He came quickly, helped his father to lift her back on the bed. He had to tell his father that she had gone. The love of his life had passed away with no one around. As a true Aussie battler, he stayed in the family home and still looks after it today. He is only ninety- four. Next time we meet Tom and Jimmy they are helping each other rake up the autumn leaves. 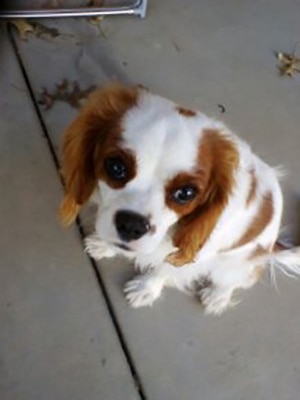 A few doors down Charlie stops as he sees streamers and balloons tied along a fence. Charlie is curious. Out comes a beautifully dressed lady for a photo. It turned out to be her ninetieth birthday. Due to the COVID-19 restrictions her celebrations were curtailed but one of her daughters came during the night and decorated the front of the house. Each member of her extended family was waiting to greet her, respecting the social distancing rule. Charlie and I wished her a happy birthday and many more.

Earlier on in the year, a neighbour with her dog, passed by our convent. Charlie happened to be outside and wanted to play with her frisky dog. She wanted to get her dog trained. During the course of the conversation I shared with her how I had Charlie trained and told her the fee. She revealed how there was only one wage coming into the home and any spare cash was saved and used for her little girl who is on the spectrum. She takes little Megan over to Shepparton once a week for a specialist appointment which costs nearly $300. I listened and the more I listened I felt so sorry for her as she said any training would have to be done by herself. Since that encounter Charlie and I have left books about dog training and some of Charlie’s toys for her dog. At Easter time Charlie and I went quietly one night to their front door and dropped off two bags of Easter goodies for her two little girls. We didn’t see them around for ages. They had gone to their grandparent’s farm to be out of harm’s way. Upon their return Charlie and I received hand made cards thanking us for our kindness. They had used some of the craft materials for Easter that we had left them.

Late one afternoon, Charlie and I were on our daily walk. A car pulled up suddenly in the middle of the road. Charlie looked across. A lady appeared whom we both recognised. Wilma was trying to get in touch with me and was amazed to see Charlie and me out walking. The first thing I asked her was about her mum whom I used to visit when I did pastoral work. (I was made redundant mid-January. I had lost track of what was happening with the residents.) Wilma wanted me to know that her mum had passed away that morning and knew how much her mum loved by visits. I couldn’t hug her due to the distancing law which was hard for both of us. Her mum’s funeral would be small with only 5 people attending. Wilma was devastated. We chatted and then she drove away.

I was left reflecting back over all the chats I had with her mum and other residents over the years, in my role as a pastoral carer. Listening and having empathy I found were key to this role.

Everyday an old man used to sit on a park bench with a bottle of beer in his hand. Charlie and I made a point of acknowledging his presence. Restrictions meant he could no longer sit there so the bench has remained empty for months. His mate appeared last week and I asked after them both. Charlie sat and listened. Turns out the mate hates being enclosed inside the walls of his house. But this fellow, Andy seemed to be doing okay. I asked Andy if he’d had a stroke as his right arm was limp. He stood there and told us that when he was six months old, he had a blood clot that went straight to his brain. I told him that was horrible and he replied that it was okay as he never knew anything different. His right side was affected. Apparently, he wore calipers till he was six and learnt how to walk. He told me that the part of brain which didn’t work was linked to him not being able to read nor write. I felt very sorry for him as he still can’t read. He can picture what the word BENALLA looks like and SYDNEY but otherwise nothing else. He left school at thirteen and got a job using a shovel, clearing the roads. He didn’t feel sorry for himself. As he said, “What else can you do? You just get on with life!”

Charlie has enabled my world to open wider with many of these encounters. Those stories above are just a few of Charlie’s interactions. I was devastated after losing my pastoral care position in one of the nursing homes here in Benalla which I had held for seven years. Despite the restrictions during this lockdown time of Co-Vid 19, Charlie has shown me how I can still use my pastoral skills as we venture out daily. Through a friendly smile, a nod of the head, a greeting shared or a dog licking you, a whole new world awaits. Since Charlie draws people to himself, he allows me to be part of this interaction. These people then often become part of my prayer at night.

An Offering from a Poor Widow: Not Many but Much

An Offering from a Poor Widow

“New Normal” in the FCJ Center