On 9th November sisters Gabriela and Ruth fcJ went with a group of young people from the Catholic High School in Bucharest to support project Plantăm fapte bune în România  (We are planting good deeds in Romania). 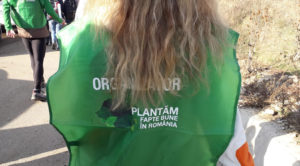 The project was to plant trees in a place about an hour and a half outside Bucharest. The event was organised by several different NGOs and there were hundreds of young people as well as some families and even younger children participating in this day’s event.

The challenge was to plant trees on land where before there had been a coal mine.  The ground was hard and dry and often the men and boys had to do the actual digging, but we made good teams with them and were able to do plenty of planting.

We planted for several hours – willow and acacia saplings. It was quite tiring but it was a good experience to be with the young people and to see how engaged they were in what they were doing. 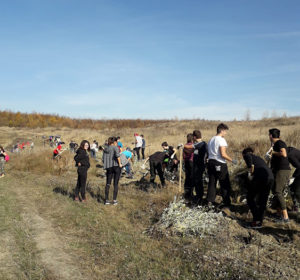 At the end of the planting all were invited to a lovely Romanian meal of barbecued chicken and pork, and beans as a vegetarian option, served on bio plates (made from bran!) and wooden cutlery. There was also plenty of home-made cake – which is an important part of Romanian culture.

In this time of global movements which are helping people to be aware of climate change, Ruth and Gabriela were both pleased to see that small steps are being taken to protect the environment and that young people are often the most active and the most passionate about caring for our earth.

To celebrate in 2020 the Bicentenary of the FCJ Society, the FCJ sisters and the Companions in Mission in the Area of Europe have made a commitment which  includes „to celebrate the beauty of creation and make a positive contribution to our local environment – We will plant 10 trees per community and/or group in 2020”.