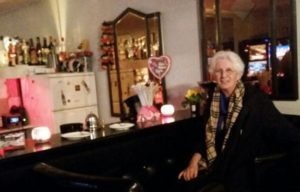 „We were dressing our tree tonight and opening cards as we put up the decorations and we read your card together.  We were very moved at what you wrote about the Romanian song which was sung with great gusto.  It is one of the most traditional and sacred carols here – and in fact we had just practised it before we opened your card.  Tomorrow we are inviting friends and having a kind of Advent/Christmas service with carols and some reflection and then a bite to eat –  so we shall be singing it again and then on Christmas eve and Christmas day – it will certainly be sung so prayers will be coming for your ladies!!!“

The big question remains: How can we prevent women coming? Information in the home countries is not enough. Unless the women get help to find work in their own country, in Germany or other countries, this „paid-for rape“, as one woman named it, will continue. 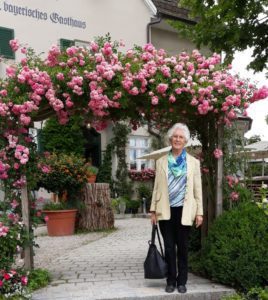 It was at the Chapter of 1988 that we first started talking seriously about „Women“. We talked about inclusive language. I nearly went up the wall at that, because I had just come back from the research mission in Asia. In India I had seen a pregnant woman at a building place, climbing up a ladder, carrying a bucket of wet concrete on her head! We were talking about inclusive language! I came from another planet. Inclusive language is now a given, the other planet has not changed very much. The concern about women stayed with me. „Women“ still are a huge question, in all countries, also in Germany. The third Millennium Development Goal of the United Nations reads: promote Gender Equality and empower women. We are far from it. Women raise questions in society and in the Church. Pope Francis has started a commission on the Diaconate for Women and he has elevated Mary Magdalene to the rank of APOSTELIN. This is hopeful but not immediately helpful for the women in prostitution, for those who are victims of trafficking and especially for the women and children who have experienced the most horrid forms of sexual exploitation. 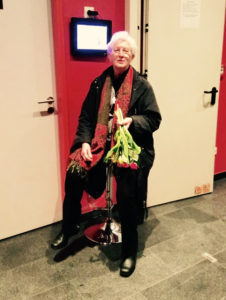 Like Mary Magdalene, walk with Jesus, take part in his pain, to the foot of the Cross, and be present on Easter morning, witnessing new life. Yes, He is alive! Sounds simple, and it is. Translated into ordinary language: be a companion to those who suffer and bring new hope, new life. No, I cannot get prostituted ladies out of their situation. In the end, they must decide that themselves. But I can bring a smile to their face, I can give them a flower, I can show them warmth, affection. I can make them feel: you are a person to be respected, you have dignity, you are precious, like everybody else you are a temple of the Holy Spirit, you are loved by God. I won’t necessarily say it like that. But the Lady who, after I had embraced her to say goodbye, broke out into tears and said: „she means it, she really means it“, knew that she was loved in truth. Is it not terrible that we (in Germany and other countries) have a system in which prostitution is allowed? And then we despise these ladies, look down on them and make dubious jokes, ignoring totally their inner struggle with guilt, shame and fear.

„Ecce homo“ – „This is my body„! There is a place in a bar in a brothel for a Faithful Companion of Jesus.