I don’t often remember my dreams but the one I had after a Sunday retreat in my school, surprised me so much that I couldn’t but remember it! The FCJ Sisters were doing the washing up after dinner, including my FCJ class teacher and I think it was Sr. Philippa, head of another FCJ school in Middlesbrough, who suddenly said, ‚So, are any of you going to be FCJs?‘ I hadn’t even thought about it and did not answer. But that night I dreamt that I said ‚Yes‘! I was flabbergasted and it set me thinking. Although I was only 14 at the time, this was the beginning of my journey to becoming an FCJ. However, I passed through many phases and feelings, at one time wanting, and another time resisting, the idea.

The FCJ who taught me Religious Education inspired me and helped me to grow spiritually. I even asked her one day to teach me how to pray, but I never told her that I was beginning to think about perhaps being an FCJ, because I knew somehow that once I did, I would have made up my mind and that was a bit scary.

I came from a very faith-filled family. We said the family rosary each evening together and went to daily Mass most days. We were involved in parish organisations and as children were encouraged to make God the most important person in our lives. Between my family and the teaching and example of the FCJ I had come to know, I was growing in my understanding and love of Jesus. He was coming so much more alive for me as a real person and I wanted to be like him and give him my whole life.

I avidly read the life of Marie Madeleine dâ€™HouÃ«t, and I was fired by it. I found her so courageous, so determined, a woman of such faith and love whose greatest desire was to do what God wanted. I was excited and ‚hooked‘! But I sent away for vocation material for other congregations as I thought I should not just fall into the FCJs because I was at school with them. But I didn’t feel as attracted to the other congregations which I read about, and eventually came to the conclusion that if the FCJ way of life made the sister I knew such a committed, loving and generous person, it was good enough for me!

But this was not the end of my struggle. At times I wanted to go along with the idea that God was asking me to become an FCJ and at others, I felt a great reluctance to doing it. I wanted to choose my own career and perhaps get married.

But one evening, just before I went out to see a film, I was in my bedroom and out of the blue came the conviction that I had to try and see if God wanted me to be an FCJ. I knew at that moment that I would never be happy unless I took this step. By this time I was in 6th form and finally admitted to the FCJ sister who taught me that I was thinking of becoming an FCJ. So although I applied to university, I was at the same time taking the first steps along the road to apply to enter the Society of the Faithful Companions of Jesus. I had a job from September to Christmas and went off to Broadstairs, Kent, in January. 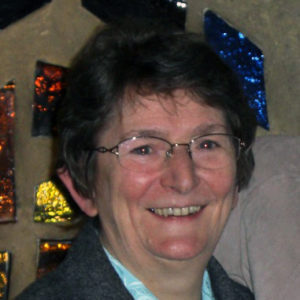 Fifty-five years later, I have no regrets! It’s been a long journey to arrive at a much greater maturity than I had at 19 years of age, and a much deeper faith. I have had wonderful opportunities as an FCJ, many challenges and a variety of ministries, teaching in schools and projects for asylum seekers, working in spirituality centres, university chaplaincy and in novitiate and tertianship formation.

I am still fired by Marie Madeleine’s vision as we come to understand it and live it in today’s world. It calls us now to stand ‚at the foot of contemporary crosses‚ and to be ‚channels of hope, love and mercy‘.

Marie Madeleine was a woman of outrageous hope, and that is what we are called to be, and what I want to be! Marie Madeleine has come so much more alive for me in the last fifteen years and her life as young woman, wife, and widow, mother and religious, seems to be able to speak powerfully to me and to those whom I meet in my different ministries.

So I am very grateful for that dream many years ago, a dream which really did come true!