Faith in Action at the FCJ Centre, Calgary, Alberta

A few of years ago, the Director of the FCJ Christian Life Centre called for a review of the Centre in the context of the Centre’s Strategic Development Plan for the years 2014 – 2019. One of the outcomes was the creation of the Faith in Action (FIA) committee. Its mandate is to reach out in collaboration, mutuality, and dialogue to build peaceful and harmonious relationships with people in the community, offering a variety of projects and programs hosted by the Centre. Unlike other programs offered at the Centre, all the FIA events depend on donations either from outside sponsors or from the Centre itself.

The goals of FIA are: To be in transformative relationship with everyone and everything, to grow in understanding and respect for other cultures and beliefs and to collaborate where possible in addressing common societal problems, and to make the FCJ Centre known as an oasis to people of many faiths.  All the FIA-sponsored events or projects try to address all the goals simultaneously.  In 2018, the committee hosted several wonderful events.  The first was a January weekend retreat offered for unemployed people. As the brochure for the retreat stated, it was “not a job-ﬁnding but a heart helping retreat of conversation, reﬂection, laughter, connectedness and hope!” The participants were so grateful for the opportunity for the time and guidance provided. The second annual “Gift of Hope” for unemployed people was equally graced and appreciated. 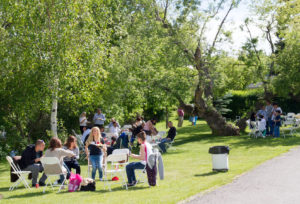 The next event was a late-August BBQ offered for 100 Turkish Moslem and 100 Catholic Syrians, all newcomers to Canada.  Formerly refugees, many people have arrived in Calgary over the past 4 years. They need moral and material support as they begin learning English, managing life in a new and very different culture, finding employment, and confronting the multiplicity of challenges that face them each day. The newcomers are so grateful for the support of people in Calgary. One of the hardest challenges for newcomers is to integrate with the broader Canadian society, with its acceptance of religious pluralism. The BBQ is the Centre’s effort to help newcomers grow in their ability to relate to, converse with, and enjoy the company of people from cultures that in their former lives, were considered suspect. The BBQ event in 2018 was the second annual Turkish-Syrian gathering and it was wonderful to see the growth from the previous year in each community’s willingness to engage with others. The planning committee for the BBQ grew in both numbers and the willingness of the committee members to take responsibility for different aspects of the event. Both Turkish and Syrian committee members exchanged ideas very easily. The 2018 BBQ featured face painting, music and dancing from each culture, Halal meats, and a visit from the mascot of the Calgary Flames, Harvey the Hound. It was a marvelous party!

Another project was a ministry to support Alpha House, a centre that reaches out to homeless people caught in addiction. Calgary has several such centres that help the homeless and the poor, but this is the only one willing to work with people still caught in addiction. Furthermore, it is located only a few blocks from the FCJ Centre, so they are our neighbors. This project has been going on for many years, but in 2018, it came under the purview of FIA.  It is called Street Feet and the tag line was “Stuff a stocking, warm a heart.” From about mid-November, the Centre advertises the need to create care packages for the homeless in the form of a thick winter stocking stuffed with useful items, such as toiletries, a hat or scarf and gloves, small packs of tissues, and a treat. This year, St. Jean Brebeuf Junior High School, a Calgary Catholic school, partnered with us in creating over 200 socks. When the socks were delivered, just before Christmas, Alpha House was very grateful for the support, since many donors prefer to limit their help to people who have overcome their addictions.

The final project of the year was the 4th annual Syrian Children’s Christmas Party, featuring more face painting (a favorite activity), carols and Christmas songs in English and Syrian, two Arabic-speaking Santa Clauses, who spelled each other off in the very warm auditorium, and, of course, delicious food provided by the Centre’s talented catering staff. Four local Catholic schools ensured that each child received a very nice Christmas gift (St. Mary’s High School, St. Monica’s, Mother Mary Greene, and Our Lady of Lourdes). This event, too, has an active committee of volunteers who work hard to plan, set up, and clean up the event.  In 2018, lovely Christmas cards were created for each Syrian family by a woman who is a friend of the FCJ Centre.  It was another well-received, rollicking party, for sure!

FIA adds greatly to the Centre’s offerings through the year and allows our FCJ charism of companionship and hospitality to shine in Calgary.

Read more in this article, Love for refugees, in the RC Diocese of Calgary website.

There’s nothing like seeing the beauty and experience the ambience of the FCJ Centre! Watch this 2 minute video.

FCJ community in Manila invites us to their Taize prayer - every last Thursday of the month. ... See MoreSee Less