Hundreds of school students in the UK and across the globe will this month take part in a collective Day of Kindness to launch the celebration of the 200th anniversary of the founding of a religious congregation, the Faithful Companions of Jesus. On September 20th, pupils in schools founded by the Congregation will be invited to go out of their way to show kindness in their school and home. This will include tea parties for the elderly, random acts of kindness and a variety of charity work. FCJ schools in Britain are located in Liverpool, the Wirral, Middlesex and London. Students in schools in Jersey, Ireland, France, Australia, Canada and the United States of America will also be taking part in creating a wave of kindness encompassing the globe.

In addition, this historical anniversary will be marked by action targeting a very modern problem: the climate crisis. Globally, the Congregation has made care of the environment a priority for mission, and in response to the climate emergency, 10 trees will be planted by each FCJ community group in their local areas. Individual sisters will make efforts to divest of single-use plastics and encourage their colleagues and friends to do so as well. The Congregation will also contribute financial support for an alternative energy project.

The Congregation of the Faithful Companions of Jesus was founded in France in 1820 and September 21st marks the birthday of the foundress, Marie Madeleine d’Houët. The bicentenary celebrations will run from the 21st September 2019 until the Feast of Christ the King in November 2020. 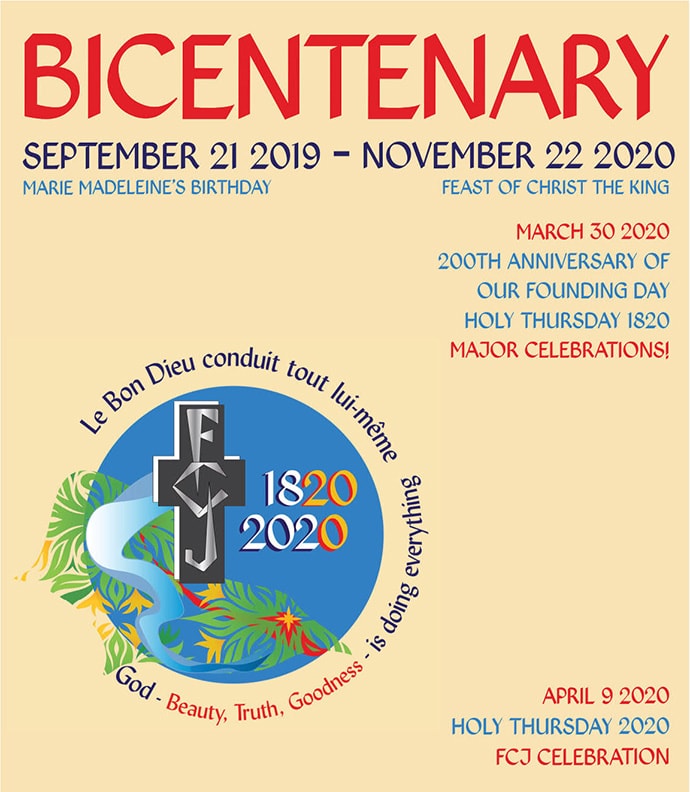 There will be a host of events to celebrate this Bicentenary Year:

May the celebrations be a source of new life and strengthened hope.

This article was adapted from ICN Independent Catholic News. Follow our Bicentenary celebrations at #FCJ200.

A Woman for Our Time: Celebrating Marie Madeleine …

Widening the Circle of Love – Celebrating …