Widening the Circle of Love – Celebrating Companionship in Myanmar

As part of the of our FCJ Bicentenary (1820-2020) celebration in Ireland, we FCJ Sisters in Ireland decided to sponsor a Water Collection Tank in the Dry Zone in Central Myanmar. We were very conscious of the added difficulties in many parts of the world where there are enormous problems regarding availability of water for cooking, hygiene and plant life – especially during COVID19. Living Water Myanmar project began in FCJ House, Myanmar in 2010 when Maw Maw, a Buddhist student from the Dry Region lived with us in the community in Yangon and I also had her in English class in Campion Institute where I taught. Maw Maw became a good friend and from her we learned many things.

From the sharing of Maw Maw’s stories regarding the impact of water shortages, a seed was sown. Rosemary, a FCJ friend from Australia who came each year to help was with us in Yangon at the time. She said she would start raising funds for Water Collection Tanks in Australia and vouched she would die happy if she could raise funds for 100 such tanks before she died. Rosemary has been extraordinarily committed to the cause and she is well on track to having a very happy death when the time comes because 340 Water Collection Tanks have now been built all around the Dry Zone providing numerous schools and small villages with access to water! 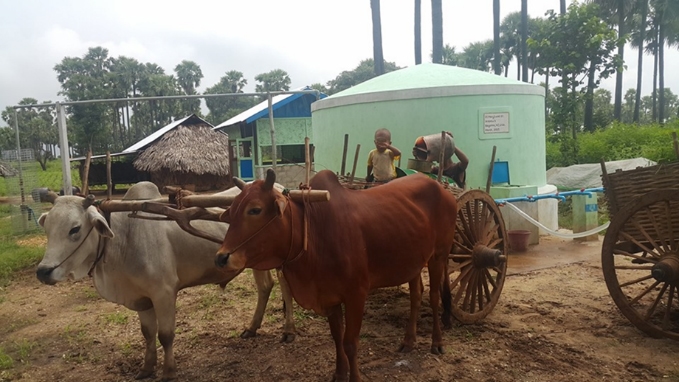 I was responsible for ensuring a good local team was set up to take on responsibility for the building of the tanks and accountability for funds raised. This was very capably undertaken by Saya Toe whom I had got to know via Maw Maw at the time and who continues to do a magnificent and faithful job, way beyond what was hoped for. Great companionship developed between the Buddhist communities and the FCJ’s and Rosemary over the years, each offering a blessing to the other.

So in 2020, when we celebrated the bicentenary of the founding of FCJ Sisters in France by Marie Madeleine d’Houët we were delighted in Ireland to sponsor a Water Collection Tank in the Dry Zone, Myanmar.

The inscription on the tank reads: FCJ Sisters Ireland, FCJ Bicentenary 1820-2020, ‘Celebrating Companionship’. This is also written in Burmese. We rejoice in a spirit of thanksgiving for the companionship that we have shared over the past years. May it go from strength to strength.

Read more about bicentenary of the foundation of the Sisters Faithful Companions of Jesus (1820-2020). Follow our bicentenary celebrations on the Bicentenary News page and on social media #FCJ200.

A Woman for Our Time: Celebrating Marie Madeleine …

Read the latest issue of FCJNews, the newsletter of the FCJ sisters in Asia and Australia ... See MoreSee Less

Latest issue of FCJNews, the newsletter of the FCJ Sisters in Asia and Australia.
View Comments

Read the latest issue of our newsletter A Woman for Our Time... Celebrating Marie Madeleine. This issue's theme is Gentleness. Through this newsletter we hope to make more widely known the life and work of Marie Madeleine, the Foundress of the FCJ sisters. ... See MoreSee Less

A Woman for Our Time: Celebrating Marie Madeleine - and Gentleness - Faithful Companions of Jesus

Read the latest issue of this newsletter - through it we hope to make more widely known the life and work of Marie Madeleine, the Foundress of the FCJ sisters.
View Comments

A reflection for the beginning of Advent in this very unusual year we are experiencing, by Sr Clare fcJ. ... See MoreSee Less

Read a reflection by Sr Clare fcJ, from Indonesia for the beginning of Advent
View Comments

Advent has started! A beautiful and profound time of waiting... Why not join an online event to go deeper during this season? There are a few organized by FCJ Sisters (check www.fcjsisters.org/who-we-are/our-mission/events/)Here is one: Advent lectio divina. ... See MoreSee Less

It is something of a surprise that Advent has newly arrived. Yet, I think we really need it this year, of all years. I am grateful that the readings for the First Sunday of Advent, are sombre in na…
View Comments

Read an Advent meditation by Sr Teresa White fcJ on waiting in hope. (It has just appeared in The Tablet)www.fcjsisters.org/news/advent-reflection-waiting-in-hope/ ... See MoreSee Less