I joined the Society in January 1963 four months before my nineteenth birthday.Â  My vocation had been fostered by six years in St. Maryâ€™s FCJ Convent Boarding School, Bruff, Co. Limerick, Ireland, where I was very happy among the Sisters.Â  When I stopped struggling (for the moment) with the sense of call I was drawn to the Society. Novitiate in Broadstairs, Kent, England was challenging but I knew I was in the right place.Â  Four years followed in University College Dublin where I graduated with a BA and Higher Diploma in Education.

In September 1969 I was missioned to the Community and Staff of St. Maryâ€™s Convent school , Bunclody, Co Wexford.Â  That year â€˜Free Second Level Educationâ€™ was introduced in Ireland and the Day School became co-educational. This was an exciting time to be a young Sister in Irish education.Â  After six years I was asked to return to Dublin and gain a Diploma in Career Guidance and Counselling.

Life for many years after that was divided between Â two great loves: Teaching and Guidance. I began to realise that I was incredibly fortunate to belong to a Society that provided such opportunities to its members.

This theme has continued throughout my fcJ life.Â  In 1980 I was missioned cross country to my Alma Mater as Local Leader, Teacher and Guidance Counsellor.Â  Here I was touched to the core of my being by the faith and trust of, in particular, older sisters who knew me as a schoolgirl.Â  This sowed the seed of an interest in spiritual conversations and retreat work â€“ for which I trained after Tertianship – and remains a ministry to this day. 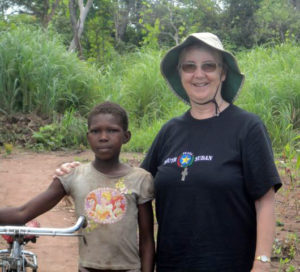 The God of surprises had many more planned for me:Â  Principal-ship, Provincial Leadership, Sabbatical in US followed in 2008 by the wonderful opportunity to work in South Sudan as a member of â€˜Solidarity with South Sudanâ€™ â€“ an international, inter-congregational, male/female group of mostly retired, dedicated (mostly retired) religious, teaching English to and training Primary Teachers through the medium of English. This was an opportunity of a lifetime and most heartily appreciated.

So it was with great sadness that in 2014 I was asked to leave Africa and return to Somerstown, London.Â  Here I was part of a Formation Community and assistant to the Novice Director. Â Before I had even arrived another wonderful gift was handed to me in the form of a part-time Associate Chaplaincy in Heythrop Jesuit University College.Â  Three afternoons a week I travelled to West London to this well-regarded, welcoming and genial environment where Staff and Students created friendliness and warmth within a rigorously academic Theological and Philosophical faculties. To return to Formation, as we enter Autumn of 2014, I realise how privileged I have been to live in a Formation Community and Â see three gifted and graced women complete Novitiate programme and pronounce Vows before embarkingÂ  on the next chapter of their FCJ journey as apostolic women in education in Canada, England and Ireland.

Deo Gratias is my soul song.