Submitted by the sisters in the Myanmar FCJ community

Since the establishment of the FCJ community in Myanmar in early 2009, the sisters have lived in three different rented houses. These moves were discerned as the mission developed. In the rented house that is now our home we are blessed with a small compound which enables us to have some exercise and do some gardening. Our small garden grows a variety of pot plants and local fruit trees which proved to be a glimpse of joy and inspiration during the time of lockdown. As Pope Francis wrote in his recent message for the World Day of Prayer for the Care of Creation, we have heard the call to exist and flourish as a community of love and to share it to others and itÂ echoedÂ in one of our recent experiences.

It has been our second lucky year harvesting belimbing buluh (Averrhoa Bilimbi), a close relative to star fruits, native to some Asian countries including Myanmar, Indonesia and the Philippines. In Indonesia (belimbing buluh) and Myanmar (yodaya saungyathi), is often used for cooking to give a sour flavor to food. It can be a substitute for tamarind or tomato in cooking. In some parts of Indonesia, it is preserved by salting and sun-drying to make a kitchen seasoning and a variety of local dishes.Â In the Philippines, the belimbing buluh tree is commonly called kamias. It is frequent in backyards and people eat the fruit either raw or by dipping it in salt. Similarly, it can be cooked as curry or added as a souring ingredient for common Filipino dishes such as pinangat, paksiw, and sinigang.

A Myanmar friend once shared an anecdote about belimbing buluh: if people were free to pick any vegetationÂ to eat in the garden of Eden, they would pick and choose all kinds of fruits and vegetables exceptÂ belimbing buluh. They would immediately be put off by its distinct sourness! However, given its excellent use in cooking, its health benefits and a range of other commodities, people would later look for belimbing buluh and appreciate it more. 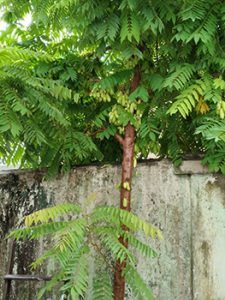 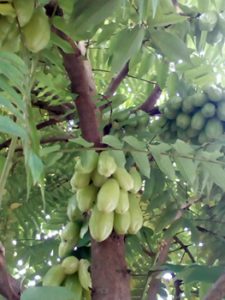 We had the joy of harvesting belimbing buluhÂ in our small garden and shared the harvest with our neighbors. It was wonderful to see the smile of our neighbors, which affirms our experience of the Sacred:

The Feast of the Holy Name of Jesus