Locally, nationally and internationally, MerseyAid is a vocal advocate for refugees and those in need of support in Merseyside. The FCJ sisters in Merseyside support MerseyAid in various way. In particular, the sisters in the Birkenhead community started as a collection point in 2015 when a woman in Liverpool began MerseyAid. The sisters began by advertising the project in their own parish, St Joseph’s. Gradually the news got to other parishes on the Wirral and more and more goods were brought to the FCJ community. They had an outhouse made for all the goods and it has never been empty in the last four years. At times it even overflows into their dining room – there are black bags everywhere.

Early on the sisters were asked to collect babies nappies –one neighbouring parish has been bringing packs of them every week. Baby clothes, prams, nappies are all badly needed in the camps. At church one Sunday in Advent they had 2-coat Sunday—parishioners were asked to bring two coats that day—-wear one and donate one to the refugees. 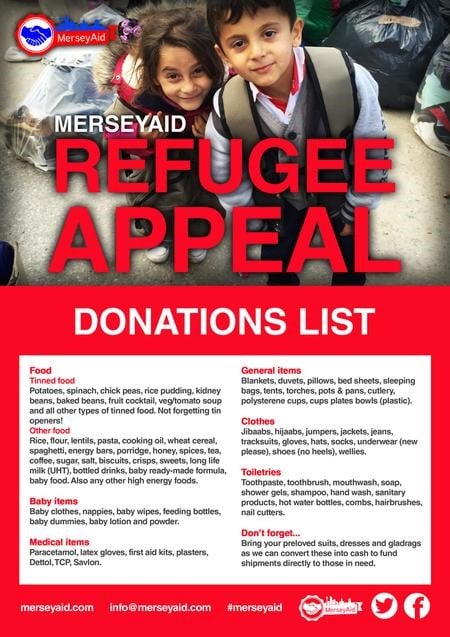 The sisters are supported by people from the parish in order to take these goods to Wallasey or Liverpool for sorting and eventually packing and loading into 40 ft containers to go the camps. So far they have collected items Items collected for various MerseyAid campaigns: Bags of Love, to children in hospital after conflicts in Syria;  a container for Greece to the refugee camps there; items for Calais/Paris, to the refugee camps and those on the streets in Paris; items for a single men’s camp of refugees in Greece.

The second container of Bags of Love has now departed for Syria; it was asked for by the doctors in the hospitals out there to help cheer up the children. After 4 four weeks in hospital one consultant said it was the first time he saw the child smile when she was given the Bag of Love.

Every Small Space is Part of Our Common Home