The Heart of Jesus and Teilhard de Chardin

The Feast of the Sacred Heart of Jesus is about Love and celebrates both present reality and future dreams. The mystery at the heart of today speaks of both rich earth and stardust and I would like to explore this a little through the lens of evolution.

â€˜I am a child of Earth before being a child of God.
I can only grasp the Divine through the Cosmic.
You will never understand if you do not see that.â€™
(Pierre Teilhard de Chardin, Lettres Ã  Jeanne Mortier 58 â€“ 59)

My first foray into the subject of evolution was when studying zoology at school. I think it fair to say that the topic was then taught as a theory – but with the accumulation of scientific evidence, evolution is now known to be fact and an on-going reality. Creation often gets pinned to the past, as though God created, stopped and stepped aside. â€˜In the beginning God created the heavens and the earthâ€™Â  (Genesis 1.1). In her book Ask the Beasts, Elizabeth Johnson writes: â€˜The evolving history of life is still underway. In and through the suffering and death of billions of creatures new forms continue to emerge. And what lies ahead is not yet known (p. 124). Creation is continuous and ongoing and everything around us is evolving, – including ourselves. â€˜Natural selection becomes actual selection when the conscious intention to create a new future awakens in usâ€™ (Bruce Sanguin, If Darwin Prayed).

Pierre Teilhard de Chardin, SJ (1881-1955) served as chaplain and stretcher bearer â€˜on the frontâ€™ in World War I. Teilhard claimed it was this experience that helped him face the fragility of the natural world. Interactions with his fellow soldiers showed him what happened when people worked together with common purpose. He dreamt of a world â€˜in which the energy and solidarity he experienced would one day be used not for war, but for the advancement of human consciousness, for the creation of a world where human energy would be expended to unify rather than divideâ€™. As a result of this experience, Teilhard became a pilgrim â€˜of the futureâ€™. â€˜He committed himself to becoming an actor in the evolutionary processâ€™ (Kathleen Duffy in Teilhard and Evolution).

Teilhard spent many years in China far from his beloved France and it was, perhaps, during this time of exile that his reputation as an eminent palaeontologist was firmly established. Fellow scientists travelling with Teilhard would marvel at his ability to read the geological landscape and to identify at quite a distance the relics of long extinct animals. But through these years there was a deeper journey taking place and Teilhard â€˜developed a new and more profound understanding of the mystery of the Incarnation. He began to â€˜seeâ€™ Christ, the Word Incarnate, at the beginning of time, plunging into matter, descending into its deepest depths, penetrating to its very heart. Like Paul, who in his letter to the Romans (8:22-23) pictures creation groaning as it awaits Christâ€™s comingâ€™ (Duffy, Teilhard and Evolution).

â€˜Viewing the Incarnation through the double lens of scripture and evolution, Teilhard came to recognise the Cosmic Christ as both immanent and transcendent. Immersed within the emerging universe, Christ guides the cosmos as it ascends from one critical point to another on its path toward integration and unification. (Christianity and Evolution ,T. P. de Chardin p 75). Putting it another way, there is an allurement that has been at work from the first moment of creation. â€˜All communities of being are created in response to a prior mysterious alluring activity (Duffy, Teilhard and Evolution). Allurement evokes being and life, and Love is a word that points to this alluring activity in the cosmos.

The same impulse that fashioned starfields from the hydrogen and helium molecules, that forged the heavy elements in the furnace of an exploding star, and that moved through a single-celled bacteria on our planet to issue in all the forms of life that we see today also moves through our own self-reflexive consciousness (Sanguin, If Darwin Prayed).

Teilhard envisages creation groping its way as it gradually advances from inert matter, to life, to thought, and as it now struggles toward ultra-personhood, the apex of evolution. Teilhard fervently believed in the continuous outpouring of Godâ€™s ever-present love, running through all of creation and animating life everywhere. He and other mystics see the whole Universe on fire with Godâ€™s love.

All the particles in the world
Are in love and looking for lovers.
Pieces of straw tremble
In the presence of amber.
(Rumi, Desire and the Importance of Failing)

This universe evolves, driven and allured by the Cosmic Christ, the motor of evolution, the Sacred Heart, the essence of all energy. 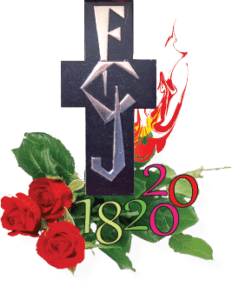 It was love that allured Marie Madeleine, the Foundress of the Faithful Companions of Jesus, when she heard the words â€˜I thirst,â€™ and it was love that attracted us too.

The Feast of the Sacred Heart is a good moment to celebrate with gratitude our responses, individual and collective as Faithful Companions of Jesus to that alluring Love.

Advent Reflection: A Taste of Eternity

Advent Reflection: From Hearing to Listening