The sisters Faithful Companions of Jesus of Indonesia, Myanmar and Philippines gathered after the FCJ General Chapter which took place in Calgary, Canada during the month of October.

This Post Chapter Meeting in Asia was held from 29th December to 1st January in Manila including a New Year celebration together. The gathering included the presence of eight sisters who attended the General Chapter as delegates from the Area of Asia-Australia. They facilitated the meeting and shared their experiences of the Chapter.

The meeting began with a prayer that expressed the Asian sisters desire to answer the thirst of Christ in our contemporary world. The opening prayer included a dance performed by two of the Indonesian sisters. The focus of the first day was a report of the General Superior to the General Chapter 2019. The sisters said:

We were led through the reports of the other Areas in the Society: Australia, Europe and the Americas. Barbara (General Assistant) led us through the General Superior’s report of the life of the Society since the last Chapter. Afra (Area Leader) led us through the General Bursar’s finance report. Many of us were amazed at the reports which were informative and inspiring. We saw the link between all that we heard and the Chapter theme: ‘Le bon Dieu conduit tout Lui-même’ (God is doing everything). After each session, we had time for personal reflection and sharing in small groups. We closed the day with Eucharist celebrated by Fr. Victor de Jesus SJ. 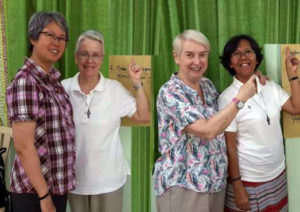 The focus of our second day was receiving and sharing on the ‘Chapter Calls’, the document from the General Chapter. We began with prayer followed by input from the delegates on each of the six Calls. Time was spent in small groups on reflection, sharing and clarification, followed by work in interest groups on the next day to start discerning ways in which to live these Calls in the Area of Asia.

The meeting included discussion on other topics, such as formation, and concluded each day with Eucharist celebrated by Philippino Jesuits friends and colleagues of the Manila FCJ community.

The sisters gathered for a celebration to welcome the New Year 2020, a special year for all FCJs and CiM because it is the bicentenary year of the foundation of the FCJ Society.