Reflections on the making of the Paris Reliquary by David John

David John is the liturgical artist who designed the reliquary in which Marie Madeleine’s mortal remains would rest in the Church of St. Dominic in Paris. 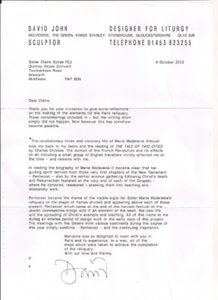 Thank you for your invitation to give some reflections on the making of the elements for the Paris reliquary. These rememberings crowded in – but the writing down simply did not happen. Now however this has somehow become possible.

The revolutionary times and visionary life of Marie Madeleine d’HouÃ«t took me back to my teens and the reading of ‘the Tale of Two Cities’ by Charles Dickens. The turmoil of the French Revolution and its effects on all including a small group of English travellers vividly affected me at the time and – and remains with me.

In reading the biography of Marie Madeleine it became clear that her guiding spirit derived from those very first chapters of the new testament – Pentecost – also by the earlier anxious gathering following Christ’s death and Resurrection featured in the very end of each of the Gospels – where he consoled, reassured – pressing them into teaching and missionary work.

Pentecost became the theme of the visible signs for Sister Marie Madeleine’s reliquary in the shape of flames divided and appearing above each of those present. Pentecost which came at the end of the harvest festival of the Jewish communities brings with it an element of seed, the new life and the spreading of Christ’s example and teaching. All of this came to me during the intense period of work in the early days of the project. The meetings with the Sisters from various continents during the course of this year simply confirms – Pentecost – and the continuing inspiration.