This post is a portrait of life in the FCJ community in Salta, a city in the North West of Argentina, at the foot of the Andes mountains. The community is located in barrio Solidaridad, a poor area of the city. Two FCJ sisters, Marguerite and Paula, live there with Sr Edith, a La Retraite sister.

Argentina has suffered an inflation rate of over 55% this past year. The National Catholic University (Universidad Catolica Argentina) monitors the social data in Argentina y periodically publishes statistics. In June 2019 the statistics indicate that 51.7 % of children and adolescents up to 17 years of age in Argentina are poor. 35 % lack an adequate diet. This is the highest figure of the past 8 years. Obviously there are consequences – one of these is the increase in number and size of the asentamiento (illegal settlements) as more and more families cannot pay rent and are left on the street. When these new families are incorporated into the community and received as neighbours they both bring and receive new life.

The work of Caritas in our parish can be summed up as follows: We support two soup kitchens, one of which is run by our La Retraite sister companion, Edith. Activities in the salon San Francisco are now “full steam ahead”. Edith organizes a substantial and nutritious afternoon tea Monday to Fridays prepared by a group of mothers who take turns two, by two to prepare the tea, serve and clear up afterwards. On Saturday mornings, while Laura, Companion in Mission (CiM) works with mothers, a group of young people realize activities with children. 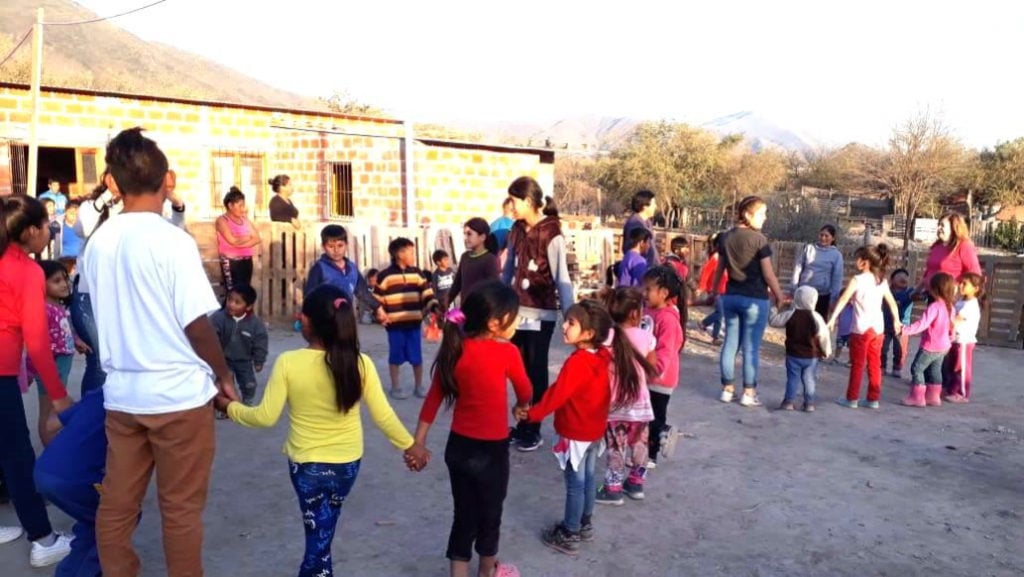 On Saturday afternoons a group of women attend workshops on bread and cake making taught by a neighbor who has bakery. The price of bread has risen rapidly, and many women are now baking their own, and even setting up a table on the sidewalk to sell their produce. The community police gave a talk to the children on how to avoid risks in the street (sadly, there is a real danger of children being sequestered by those who are involved in human trafficking). Members of Caritas National also offered an afternoon of formation in the mode of recreation in San Francisco. which was greatly appreciated by all.

The other soup kitchen, based in a simple family home, serves a main meal three times a week to almost 170 children and tea every afternoon from Monday to Friday to the same number. This project, which was the initiative of the owners of the house, calls upon the support of neighbours. When numbers began to increase, the couple, Andres y Claudia Mendoza, approached us in Caritas for help. We are able to assist them with a small amount each month from our limited funds (earned from the sale of used clothing), and with two other more substantial donations from other sources. The remainder is financed by the couple and their neighbours. Their dedication is admirable, given that they have five children of their own.

Having himself suffered hunger as a child, Andres saw that many children go hungry to bed each night, and decided to actively fight against hunger in his neighbourhood (one of the poorest barrios in our parish).

Another example, apart from Caritas, takes place in the small plaza near our house – Every weekday a group of women prepare a communal meal. This means making a meal in a big pot over a wood fire, near our house so that their families can have a midday meal.

Caritas also distributes ten food boxes each month to the most needy families – mostly families with many children. There are also two building projects underway – additions of a small room to each of two homes. These aforementioned activities are financed mainly by the sale of used clothing (donated by parish members and by other parishes). Paula and her helpers open the ´boutique´ each Wednesday afternoon and Sunday morning.

Zumba dancing, led by Laura CiM, is now offered three evenings a week in the parish patio, and one afternoon a week in a nearby catechetical centre. The women participants often stay on afterward to drink mate and chat about their lives. Another Caritas helper, Griselda, has replaced Paula teaching slipper- making. Her students learned very quickly and were soon selling their products.

The group working with Edith in the Pastoral Health programme, especially Edith and Rosa (CiM), continue to visit the sick, persons living alone, in hospital or mourning the loss of a loved one. Edith brings us news of their progress and is always asking for prayers.

Those who need food assistance are brought to the attention of Caritas for help with dry goods, but most of all they are offered a compassionate and listening presence.

Rosa and Edith also visit a young man from a community in the mountains who is suffering from leukemia and had come to Salta for medical treatment. He had not received the Sacraments so Edith and Rosa are preparing him for the Sacraments of Communion and Confirmation. His medical condition has improved greatly, thanks be to God.

On Sunday June 16th, feast of the Holy Trinity, our parish organized a procession through the streets of the barrio with an image of the Blessed Trinity (yes, we do have one!) and a beautiful Mass. These religious activities were followed by an outdoor festival which lasted until well after midnight, in spite of the cold weather.

As part of the festival, Caritas organized a Fashion Show using selected clothing from its supplies of next-to-new! The models, of all shapes and sizes, did not conform to the traditional tall, slim women – nor was the clothing displayed exactly what one would expect. We had some very unique clothing, jackets and skirts, made from donated jeans by Isabel, who is a designer and also a CiM. One of the jackets has 10 pockets! She also produced a beautiful coat of many colors creatively cutting and putting together several sweaters. This was such a hit that it found a new owner that very night! We sold several ítems, and were also praised for showing that a person whose wardrobe is based on used clothing can dress beautifully no matter what their size or shape. The only man who had the courage to model, escorted a lovely young woman dressed in a used and revamped wedding dress. He was dressed in a creamy white suit.

The script introducing each model was designed to evoke laughter. All in all a great hit! There were many entertaining ítems – musical, folk dancing, skits, etc. At one point the folk band had almost everyone up dancing… a good thing to warm us up! We were nourished by the variety of foods offered (sold) by different parish groups. The most popular was a bowl of locro a corn-based thick soup ideal for cold weather.

Paula continues to entertain a small group of neighbourhood children who to date have each made three pairs of slippers, a pair of canvas shoes, and are now beginning to make plant hangers (including preparing the plants to hang in them). This latter is a project for Mother´s day which takes place in October. It is delightful to watch these children mature, and very entertaining to listen to their conversation as they sew.

Early this winter we celebrated Marguerite’s (80th!) birthday. Marguerite continues to be part of Sembrando Esperanza. The centre for children with handicaps, CAM Martin de Porres, is now a Centre for Inclusion in the public school. The children attend school half a day (most schools in this part of Argentina have this scheme). A special education teacher from CAM accompanies the class teacher in the school to adapt the curricula to the needs of the pupil. The child attends CAM twice a week in the other half day turn where he/she receives the services of a special education teacher, an educational psychologist and a psychologist.

There are a great number of children with learning difficulties in the area, and CAM Martin de Porres is the only such Centre in the area.

In the past three months an extension building to CAM in the adjoining plot is being built. Funds were assigned by the national government but only a small proportion of the amount promised by the anterior government, and due to the high rate of inflation, the funds were greatly diminished in value. Our FCJ Society gave Sembrando Esperanza a generous donation which has enabled the building to continue. The plans have had to be changed, but the basic needs to more space for consulting rooms will be fulfilled.