History of the Faithful Companions of Jesus in Italy

History of the Faithful Companions of Jesus in Italy

History of the FCJ Society in Italy

In the years 1832–33, the Society of the Faithful Companions of Jesus was already present in different European lands where King Carlo Alberto of Savoy reigned. He heard people speaking highly of Marie Madeleine d’Houët, our Foundress, and of how well educated students came out from her schools. So he invited her to come to Piemont. In January 1836 Marie Madeleine, accompanied by one other sister, set out for Turin in the depth of winter. She took possession of the lowly accommodation offered to her by the Marquis Roberto d’Azeglio.

As a woman of the Church, Marie Madeleine quickly sought the wisdom of Mons. Fantini, the Parish Priest of Annunziata, about her work for the nobleman. He did not hesitate to advise her to gradually purchase large premises at the foot of Monte dei Cappuccini, so that she could be independent in her work of education for the youth. In her Institute, young people would be able to breathe and grow in an atmosphere of serenity and loving care for them. And for more than 150 years the FCJs have offered a high standard of cultural, human and Christian education to hundreds of students.

Great Saints such as St John Bosco (Founder of the Salesians) and St Leonardo Murialdo (Founder of the Josephites) were able to get to know our Institute and to attend it by exercising their ministry and receiving in exchange large favors for the success of their works and missions. Their spiritual exercise had a wonderful influence on the pupils and the community of sisters. 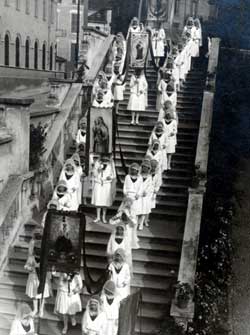 At the beginning of 1890s a home for elderly ladies was added adjacent to the boarding school for girls. The number of Sisters living there at that time was about 90. Animated by a strong desire for the deepest good of others, the sisters worked generously to offer solid values to those who came to the Institute which was a place pervaded by the spirit of love, of freedom and of prayer.

Throughout the years the FCJ Sisters tried to respond to the most urgent and changing needs of education. So, during the twentieth century their school changed focus several times until, in the 1970s, it developed into a Primary and Infant School for day pupils.

In 1985 in the area of the Gran Madre, there was no lack of Catholic schools and the number of sisters and the number of children in the area were decreasing. This led to the Archbishop Cardinal Ballestrero’s appeal to go to the parishes of the neighboring areas of Turin. It was decided to phase out both the school and the home for elderly ladies. The big house with its lovely garden was sold to the Diocese who adapted it to become the Major Seminary. Now our Sisters were available to respond to other needs of God’s people: communities in Livorno and in San Mauro Torinese were opened, while some FCJs remained in Turin and moved into a smaller house within the same property.

The FCJs continued their mission in Turin at Via Lanfranchi by their collaboration in the some of the work of the Major Seminary. In this way they made the life and service of consecrated apostolic women, present among the young seminarians. They also continued their teaching in schools where they are able to bring the FCJ spirit and they have a nursing presence in caring for the sick. 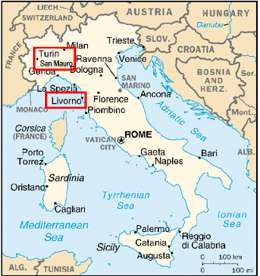 In Livorno, starting in September 1983, our sisters took over the direction of a retirement home – “La Provvidenza“, spiritual animation in the church of Santa Giulia, catechesis in parish groups and the teaching of religion in the State Middle School.

In San Mauro a community was started om 1985. The sisters were involved in the teaching of Religious Education in the Primary and Middle State Schools and in the running of the Infant Parish School of ‘S. Benedetto’. Their presence is also very much sought among the children and the young people of the Parish where they offer catechism classes and pastoral care. Finally, as Ministers of the Eucharist they bring comfort and relief to many disabled local people.

Some FCJ Sisters in Rome 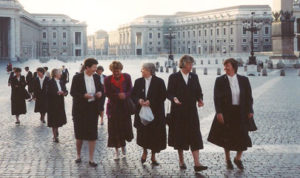 Unlike many congregations our headquarters has never been located in the Eternal City, although many important moments in the founding of our  Society happened in Rome. Our Society leaders visit Rome regularly to do the necessary business of the congregation and we have often had a pied a terre in Rome through our sisters, who at different times, have been missioned there for work or study. An example of this was one-year sabbatical ARC programme which was followed by  several FCJs in the 1970s. The Society also held several General Chapters in Rome, in 1975, 1983, 1988 and 1993.

Sr Ruth fcJ was one of a group of eight sisters who were missioned to study in Rome in 1981 – a time which turned out to be quite memorable.  On their first Wednesday in Rome, October 7th 1981, Pope St John Paul  II came back to the Piazza San Pietro for the first time after the failed assassination attempt in the previous May.  It was also on the train journey to Rome that the FCJ group met Bishop Alberto Ablondi, from Livorno, a meeting which led to our being invited to work in the Diocese of Livorno, and to a long friendship with this very pastoral bishop, only recently deceased. It was also the year of the Falklands war. One of our memories, says Ruth, is of a lovely Argentinean priest, also a student – and of our living through that experience together; five of the eight of us were from Britain, which was at war with Argentina.  Another memory is of being able to be immersed in Ignatian spirituality and visit some of the special Ignatian sites to ‘spend time’ with St Ignatius in his rooms or in La Storta.  Our Jesuit friends were a great support to us during these years. The studies done by the sisters included spirituality, psychology, Italian, as well as sabbatical studies in the ARC programme and at Regina Mundi.

Since 2003 Sr Christine Anderson fcJ, who had been director of the Craighead Institute in Scotland, was missioned to Rome where she worked first as Human Resources Officer for Jesuit Refugee Service International. Because of her involvement in setting up the International Congress on Consecrated Life Passion for Christ, Passion for Humanity in November 2004, Christine’s work evolved towards training programmes and consultancy for leadership teams of apostolic religious congregations in Rome. She founded Faith and Praxis for Global Leadership in 2011 and worked with both leaders and members of religious organizations to enable them to engage fully with their potential for apostolic ministry in the twenty-first century. In January 2019 Faith and Praxis started a new stage. Marist Brother Emili Turú was appointed as the new director and the organization moved to new offices within UISG. Christine continues connected with Faith and Praxis as an Associate team member and engages in spiritual accompaniment and supervision in a variety of settings. She always gives the warmest of welcomes to FCJ visitors to Rome.

For those who have had the opportunity to visit or live in Rome, the city will always have  special memories and a particular attraction. Certainly it is a privilege to have spent time there and occasionally to have had a glimpse of the wonderful roots and history of our faith.