History of the Faithful Companions of Jesus in Switzerland

History of the Faithful Companions of Jesus in Switzerland

History of the FCJ Society in Switzerland

Monseigneur de Chabons, Bishop of Amiens, and a trusted friend, encouraged Marie Madeleine to have a foothold in England and Switzerland when there were difficulties blocking her plans for the houses in France. A number of providential events led to the first Swiss foundation in 1832.

CAROUGE… A busy little town, situated only 2 km from Geneva and 5 km from the French border, became part of Switzerland after the Treaty of Vienna of 1815 detached it from the Kingdom of Savoy. Geneva was a  puritanical Protestant stronghold. Carouge became a refuge for Catholics, Jews and even some less puritanical  Protestants.

Marie Madeleine d’Houët, foundress of the FCJ Sisters, opened the house in Carouge in November 1832, and extended it to accommodate a free school, an industrial school for girls learning a trade and a boarding school destined to become known throughout Europe. The boarding school for young Catholic girls in Carouge aimed to give a solid Christian education giving them a love for their religion and forming their intelligence by the study of useful sciences.. The uniform was a black woolen dress, a white dress and a pink dress with a white or pink belt and a black silk hat lined and decorated in blue.  The house had a beautiful garden. Marie Madeleine described the house as comfortable and pleasant and it became her administrative centre until the house in Paris was opened in 1848.

It was as she was establishing the house in Carouge, that the Bishop of Lausanne, Fribourg and Geneva invited her to open another house in his diocese in ESTAVAYER.  Both houses flourished.

In 1875, religious orders were expelled from Switzerland. The Sisters had to leave Carouge … and took refuge in the village of VIRY 30 kilometers away in Haute Savoie in France. The Count of Viry offered accommodation in the chateau, where the boarders from Carouge were housed for some time. During that time, in VEYRIER sous Salève, a village a few kms away, partly in France and partly in  Switzerland, a magnificent new stone house was being built with room for 200 boarders, opening its doors in 1877.  Today Veyrier is in Switzerland.

Laws striking at Catholic education were passed in France in 1901 by the anti-clerical republican government.  Teaching institutes were suppressed. Many Congregations fled France, some coming to Switzerland, but the Swiss Federal Council was not welcoming.  In 1901/2 the house in Veyrier was taken over by the French State and now is the Maison d’acceuil et de vacances de la SNCF, a holiday home for the employees of the French Railways. 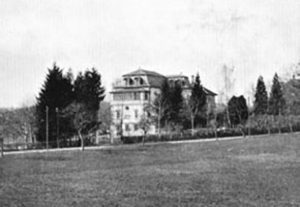 In 1903, the Sisters bought a large villa and farm in the commune of Givisiez, Fribourg, a catholic Canton, which with the help of providence, became LA CHASSOTTE, an international boarding school. Conditions were cramped at first.  New buildings were needed to accommodate the increasing numbers of boarders. During the 1914-18 war, the Sisters were able to help the wounded by sending pupils daily by train with medication, clothing and sweets, a gesture that was noted by the French authorities who presented the school with a Medal of Charity. During the Second World War, only four Sisters remained, the rest were recalled to England, and the children also went back home.

After the War, the school flourished again. The villa was pulled down in 1959 and replaced by a three storey building finished in 1960. A large part of the garden was sold as the new motorway was built in the 60s, cutting across the property. La Chassotte was renowned for its language teaching and excellence; pupils were prepared for the Cambridge diploma and for the French Baccalaureat.  Between 20 and 30 nationalities were on the roll and an increasing number of day-pupils. In 1975 the school welcomed the first boys, in their white shirts, grey trousers and pullover. Many young FCJ Sisters came and studied at the Catholic University of Fribourg.

By the 1980s the staff were nearly all lay people, the Swiss authorities no longer gave a residence permit “C” to FCJ Sisters coming to work in the school. In 1984, the decision was taken to sell la Chassotte. In June 1987, there was a great gathering of past and present pupils, about 500 came from all corners of the world, a bittersweet gathering celebrating La Chassotte.  After 83 years of service the Sisters left La Chassotte.

Since 2005 every second year there is a gathering of ex-pupils of La Chassotte, organized in different countries and by the ex-pupils themselves. At these meetings the sense of gratitude for the excellent work done by all the sisters’ fcJ in the school is evident and enduring. 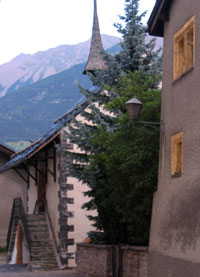 In September 1987 the Sisters came to NATERS, VALAIS, missioned to the Altersseidlung Sancta Maria, ministering to the elderly, nursing and caring for their spiritual needs. A second Home, St Michael’s was built in 2005.

In 2011 the Association of the Home in Naters started to build a new complex of buildings, which will receive day care patients from the village. By the year 2015, this Centre for the elderly of Naters was the biggest facility for the elderly in the canton of the Valais.

The sisters also ministered in a kindergarten run by the commune of Naters. This kindergarten was opened by the FCJ Sisters and celebrated twenty successful happy years in 2010.

A small community continues to live and minister in Naters, working in the chaplaincy at the home for elderly people.