History of the Sisters Faithful Companions of Jesus in Romania

History of the Sisters Faithful Companions of Jesus in Romania

The FCJ Society in Romania

After the fall of the Berlin Wall many religious congregations, including our own, turned towards Eastern Europe to explore possibilities for ministry. In January 1994 three FCJ sisters were missioned to two cities in Romania: Galaţi and Bucharest.

In 1992-93 two Faithful Companions of Jesus, sisters Maeve and Imelda, were sent by the FCJ Society to visit different countries of the former communist bloc to see how our congregation could support the local Church and to explore possibilities of ministry.

The first country visited by sisters Maeve and Imelda was Romania. They arrived in Bucharest on a Saturday, and on the Sunday went to a newly opened Catholic Church of Our Lady of Sorrows in Bucurestii Noi, for Mass. Looking through their post a day or two later they found a letter sent by an Irish FCJ and which enclosed a photo of a tabernacle, which the Irish community had sent to Eastern Europe in response to an appeal for church ornaments for the former communist bloc. The sister wrote to Maeve, just in case Maeve and Imelda would happen to see it on their travels in Yugoslavia! Looking at the photo, Imelda immediately recognised the tabernacle they had seen in the church of Our Lady of Sorrows in Bucurestii Noi, the first church they had visited in Romania! An incredible moment and a real sign for them that God was already there waiting for our sisters to come to Romania! All in God’s providence!

In January 1994, as a result of their research, three FCJ sisters were missioned to Romania — Mary and Imelda to Galați in the east of the country, on the Danube river, and Margaret to Bucharest, Romania’s capital city, where Archbishop Ioan Robu needed an English teacher for the Catholic Institute of St Teresa, in Bucharest.

The FCJ Sisters offered support and encouragement to the Romanian people principally through education and English language programmes for children and students.

In Galați the Sisters worked closely with the Franciscan parish of St. John the Baptist, helping families in difficulty and offering catechetics. One sister went to help and care for little children at the State Orphanage and the other was teaching English to the lecturers in the University of Galați.

Since there were young women interested in becoming Faithful Companions of Jesus the first Novitiate was officially set up in Bucharest in December 1996. Over the years, some came and stayed with us, while others left. We thank God for our two Romanian Sisters who made First Vows in our Society in 2008, and in 2017, Final Vows.

Up to 2003, the Sisters in Bucharest offered accommodation to students in their apartments. They taught English in the Catholic schools, Secondary and Tertiary levels. They also collaborated with the Jesuit Refugee Centre Pedro Arrupe, where for a number of years, sister Maeve was a valued co-director, instrumental in building up the JRS Centre with Fr Luc Duquenne SJ.

Teaching catechetics in the parish, reaching out to old people and families in difficulty, teaching English, working with children from disadvantaged and sometimes abusive homes, as well as facilitating over several years the Integration of Faith and Life course offered to groups of young people 2009 – 2012 by the Craighead Institute (from Glasgow, Scotland) – these are just some of the many opportunities for living companionship in love, compassion and trust.

From 2005, our FCJ community, in collaboration with other Religious Congregations, became involved in raising awareness of the growing problem of human trafficking, many victims coming from Romania. 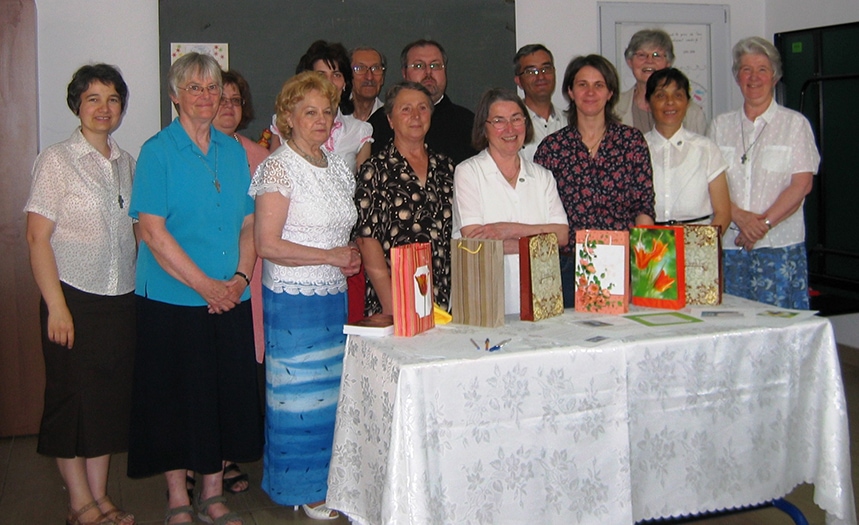 A number of people caught by our FCJ spirituality, became more closely associated with us, as Companions in Mission, sharing the charism of Marie Madeleine and choosing to live it, collaborating with us wherever possible. The first group made their commitment in Galaţi in 2010. A second group was formed in Galaţi and one group in Bucharest.

In 2020, our activities include preparation for the Sacraments in the parish, supporting the elderly and families in difficulty, teaching English, spiritual accompaniment, psychological counselling, teaching in school, human and spiritual formation for different local and international groups, and supporting those who have been exploited.

Through their daily lives the Sisters witness to their charism of companionship with Jesus and with each other.

Reflections from Maria Fidelis on the Day of Kindness #FCJ200 ... See MoreSee Less

Today is Marie Madeleine's birthday. What an extraordinary year since last birthday, when we began our Bicentenary Year 1820-2020 #FCJ200... We pray for all of you and your families, and in a special way for our Companions in Mission, who celebrate their day today. ... See MoreSee Less

FCJ Bicentenary Starts Across the World - Faithful Companions of Jesus

To honour our foundress, Marie Madeleine d’Houët (1781-1858), and to celebrate the launching of the Bicentenary of the FCJ Society 1820-2020, around 20th-21st September FCJ Sisters and all FCJ scho...
View Comments