The Blessing of Sarasvita, the FCJ Centre of Spirituality and Human Development

Well over a decade ago the FCJs in Indonesia began to dream of having a spirituality centre where they could respond to the call given to Marie Madeleine to give retreats, run recollection days and bring a little joy into people’s lives. We were able to buy several strips of land adjacent to the community house in Soropadan and the dream and the building began to take shape. After years of patient negotiation, careful planning and hard work Sarasvita, the FCJ Centre of Spirituality and Human Development, grew into being. The name Sarasvita is taken from Sanskrit and means ‘Living water’. It is our hope that Sarasvita will be a spiritual oasis for all those who are thirsting for the love of God.

Given that we live in a multi-faith neighbourhood we decided to celebrate the official opening of our centre in ways that reflected and respected our diversity. On the morning of 21st October we welcomed over two hundred guests to a beautiful Eucharist.It was so good to share the day with friends, neighbours and families of FCJs. Many of our Companions in Mission were present as well as nineteen FCJs. In addition to all FCJs living in Indonesia, we had the great joy of welcoming Sr Mary Claire Sykes FCJ, General Superior, Sr Patricia Binchy FCJ, General Assistant, Sr Judith Routier FCJ, Area Leader, and Srs Afra Primadiana FCJ and Agnes Samosir FCJ, members of the Area Council.

The Eucharist was celebrated by Fr. Mulyatno, a good friend of the FCJs. Children from Sengkan Kanisius Primary School formed the choir and played traditional Gamelan music. This is the school where Agnes Dini FCJ teaches Religious Education and English. The resonant tones of the Gamelan filled the air with beautiful music and the children’s singing was delightful. Some of the hymns were Javanese and others were Indonesian in Javanese style. The homily focused on the beauty of Sarasvita as a place of sanctuary and spiritual renewal. Towards the end of the service the priest processed around the entire complex blessing it with prayer and holy water. Sr Claire then signed a special plaque commemorating the opening of Sarasvita. After the Eucharist we enjoyed a festive lunch of traditional foods served from various small food stalls. 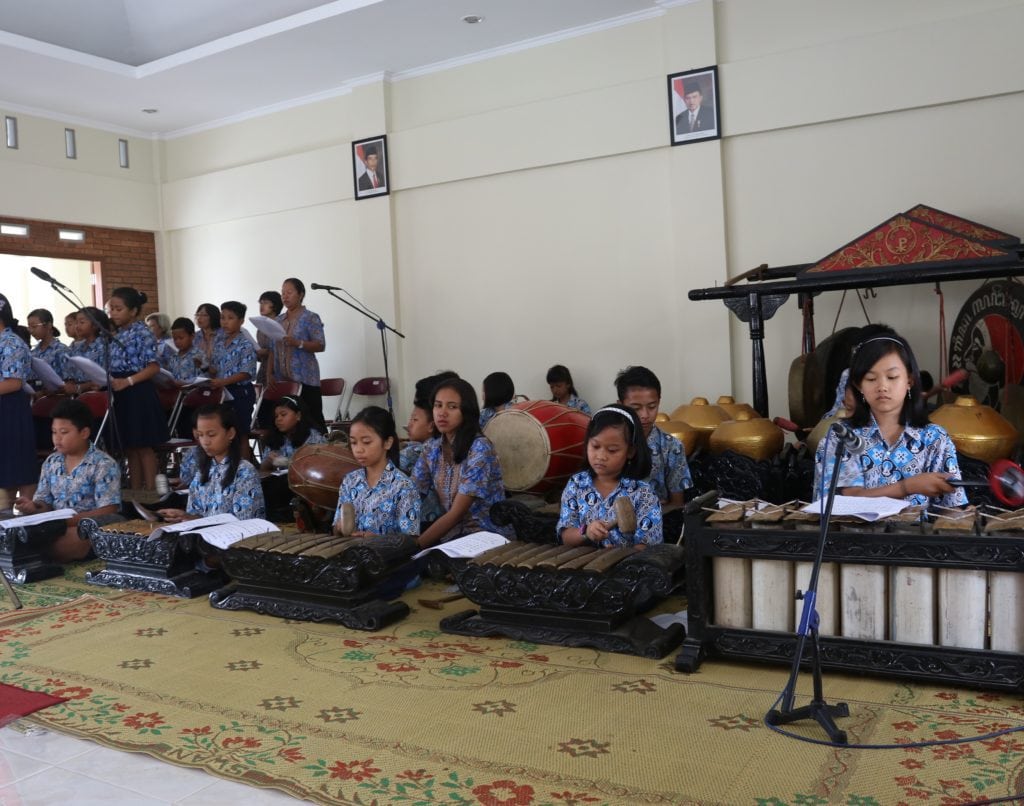 Later that evening we welcomed three hundred of our neighbours to enjoy a performance of Wayang (a traditional Javanese puppet show). As we greeted them we gave out boxes containing food to be enjoyed during the performance. The FCJs moved around the group to make sure everyone felt really welcome and at home.The audience really enjoyed the show. We were thankful that so many of the villagers came to join in the festivities at Sarasvita. It made a wonderful end to a perfect day.