I was born and grew up in Duncan, British Columbia (BC), Canada, on Vancouver Island which is often called “God’s country.”  As I look back on my life I realize that the seed of my vocation was sown through my parents who both loved God deeply and showed it in various ways.  For example, my mother used to sing love songs and hymns as she worked around the house.  I never knew if she was singing these songs for my Dad or for God, and I never asked her.  I liked to think the songs were for both.

In elementary school I read every book on saint’s lives in the library and as a teenager didn’t mind going to daily Mass with my mother, brother and sister.  At the end of high school I considered entering with a congregation in Vancouver, BC but was advised to go on to further education and experience some of life.  I was reassured that if I truly had a vocation it wouldn’t leave me and that I could always follow this desire later on.  I somehow trusted that and enrolled in the University of Victoria where I pursued a degree in Zoology, another love of mine.  I enjoyed the social life, but it never felt really fulfilling.  After graduation and a year of Professional Training I taught for about six years in various places in BC.  All the time I was looking for the right man.  At one point I got engaged, but then broke it off. 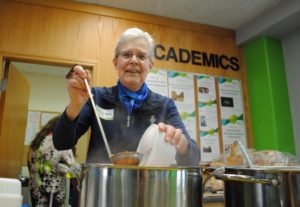 I decided to take a break from teaching for a couple of years.  To do that and utilize my training I moved to Calgary, Alberta, where I got a job in a lab analyzing soil, water, air, gas and oil samples.  I was laid off in the slow time but I found another job in a smaller company, doing similar work on a smaller scale, and with a smaller salary.  Sometimes I could even save $25 from my monthly pay check!  I was able to figure skate and cross-country ski, both great loves of mine.  Since I was living near the Cathedral that became my parish where I joined the choir.  We sang at the noon Mass every Sunday.  I also was a member of the Adult Faith Formation team which planned faith sessions for Advent and Lent.

I began to notice that, even though my work was very routine (boring) I was very happy!  I had friends in my life, but no one that was any more special than any other.  I began to ask God what was going on.  Where was the right man?  One day, when I was in the cathedral before Mass I asked God this question, and to my surprise, I heard the words:  ‘Or be a nun.’  I looked in the direction of the “voice” but there was no one there.  My response was:  ‘Oh no, that won’t be any fun.’  However, I wrestled with this over the following weeks and came to realize that it was only in responding to this invitation that I would be assured of peace in my life.

The next question was:  which order? I knew of several congregations from experiences of various sorts and I knew of numerous other orders through my earlier reading of saints’ lives. As it turned out I was invited to stay the weekend in the convent when an FCJ novice was to make her vows.  I knew nothing of the Faithful Companions of Jesus.  I accepted the invitation.  When I left the convent on Sunday afternoon I noticed that I was singing as I walked the few blocks home.  I realized that the joy that I’d experienced over the weekend was resonating with me.  I knew then that that was where God was calling me.  That was the spring of 1977. 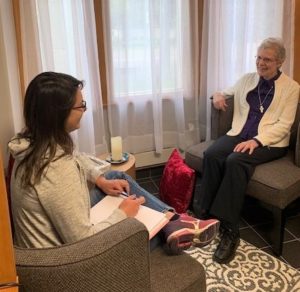 Through this vocation I have lived and served in many countries, including England, the Philippines, the United States and Canada.  I even spent a good number of years in my home province of British Columbia, something that initially did not seen possible since there were no FCJs in that Province.  However, God has wonderful surprises to gift us with.   I spent time in schools teaching, in administration and in campus ministry, and have worked with and learned from Indigenous people.  I am currently in the ministry of spiritual direction, which I love.

Naturally there have been challenges through the years but I have never doubted my vocation.  I thank God for this grace and for God’s faithfulness to me and for granting me the grace to be faithful to this wonderful life.

As I look back over these thirty-eight years, I see that living in companionship with Jesus and with all those who have been part of my life has led me to deep joy and peace.  This is what I was looking for. What more could I ask?