Ever since I was born I was marked for a call. I suspect that being given the name ITA which was a name that seemed to be a favourite in my family history coupled with the fact that I was born on January 15, the feast of St. Ita, a local saint much venerated and loved in County Limerick, seems to me now to be propitious. A grand-aunt, Sr. Ita, was a religious sister in some Order who came home from the US occasionally during my childhood. She always asked especially to see me and brought me a treasured silver rosary for my First Communion. I sensed she had an eye on me to become ‘a nun’ as also had another grand-aunt, Sr. Gabriel, who was a what we called a Blue Nun, a Nursing Order that ran St. John’s Hospital in Limerick. She ministered in Malta but came home often. When I was 14 she sent for me and presented me to some visiting Superior as a possible candidate. That scared me and made me face the possibility of a religious vocation but at the same time I was reluctant to ‘be caught.’

At age 11, I began my secondary school education with the FCJ sisters at Laurel Hill Convent, Limerick. Around that time I had an experience of Jesus, while praying at the altar of the Sacred Heart in the Redemptorist Church. There was a beautiful painting of the Sacred Heart there and I became lost for some time in an altered state, where I felt the closeness of Jesus. From then on I fell in love with Jesus and I knew that I must follow him, but how was not clear. 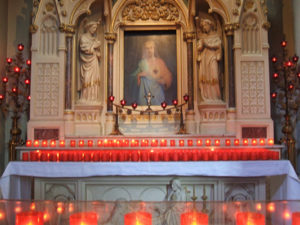 Growing up in a Catholic environment where Novenas, Benediction, altars alight with candles and flowers were part of our devotional life, I often heard sermons about the importance of doing the will of God. The Redemptorists in Limerick gave monthly sermons to teenaged girls about various topics but especially emphasizing the ‘Will of God’. If one were to neglect doing God’s will, one could be lost eternally. I began to pray more and more to know what God wanted from me, but I begged that it not be as a religious. Still the idea would not leave me. Finally I brought it to a priest whom I admired and trusted. Though we only talked in the Confessional, he asked questions and invited me to come and meet him in the Monastery, only after I had prayed to the Holy Spirit for guidance. It was the weekend of the Feast of Pentecost. I stormed heaven all weekend and when I met Fr. Pat face to face, he said without any more discussion, “I believe that you have a vocation.” All at once my anxiety and indecision left me and I was filled with peace.

I was still at school and had two more years to go before doing my Leaving Certificate exam. In the meantime I was taken to see several Religious Orders in the area. Each time I felt an enormous reluctance to join any of them nor did I want to join my grand-aunt’s Order even when pressure was put upon me. I was at school with the FCJs but had no attraction for them. My objection was that they were teachers, and teaching was the last thing I wanted to do. This is amazing to me now, as I have ended up discovering that I have a gift for teaching.

Still God had other plans for me. One day, when confronted by my confessor and asked for one answer, either a “Yes” or a “No”, he said, “Do you want to become an FCJ?” I answered “Yes” without thinking. Then my heart sank for a moment. What was I thinking? But suddenly I was filled with a deep and lasting peace. I knew that this was where God was calling me. All that remained was to go through the various steps to realize my vocation. That peace has stayed with me ever since through all the ups and downs of life. I knew nothing about Marie Madeleine or Jesuit spirituality. I imbibed the FCJ spirit through contact with members of the Society, who carried the charism and lived it. Sr. Raphael, who was my Math teacher, was Principal of the school and also the Superior of the Convent. I loved and admired her and told her of my hopes to be a ‘nun’ and possibly an FCJ. She did not try to influence me, simply stood back and observed, letting the truth of my vocation emerge slowly. I was encouraged by this attitude which I had not found in Superiors from other Religious Orders I had investigated. It allowed me to make a free choice, gave me space to continue responding to what God seemed to want from me. All down the years she looked out for me with love and kindness and encouragement, a true Faithful Companion embodying the charism and spirit of our Society in her gentleness and caring.

The centre of my vocation is my commitment to Jesus and with him, an abandonment to the will of the Father no matter what, even at times when I have begged to be let off the hook,- to not have to go here or take on that role. At times of crisis when I questioned again why I was here and what my life was really about, and I was tempted to give up and leave, I found I could not. Somehow God had a hold of me. I even prayed to be ‘let go’ but God’s love prevailed. This was experienced as a very strong force which I could not escape, a torrent or stream that carried me and I had to surrender. 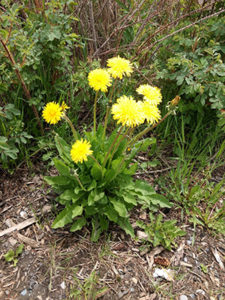 Re-examining my early call, I realized later in my religious life that I was called even before my experience at the altar of the Sacred Heart. It was in a meadow, near my grandmother’s house in the country. I was eight years old. It was May-time and I was alone. Suddenly I saw the meadow flowers, especially the dandelions, become radiant. They shone like suns. I looked up and immediately felt the gaze of God. I was surrounded by a warm light.

I knew I was seen and loved. At that moment I knew that God really existed. At times of darkness I go back to that meadow. From this experience I have come to call God “My Dandelion God.” Those much maligned flowers that we so often kill off in our lawns have become for me a sacred symbol of my relationship with the One who called me “before I was born.”