On March 8 1970 I made my first vows as a Faithful Companion of Jesus in St George’s Chapel, Broadstairs. March 8 2020, my Golden Jubilee Day, was a Sunday, and knowing that I would be with my usual Sunday Mass community at the Catholic Chaplaincy to the Liverpool Universities, I asked our chaplain, Fr Neil Ritchie, if I might acknowledge the day by renewing my vows at Mass and bringing in a few cakes. The Merseyside FCJ sisters graced the occasion by their friendly presence, and the students and Fr. Neil gave me a little gift and flowers and wrote some kind words on a giant card. 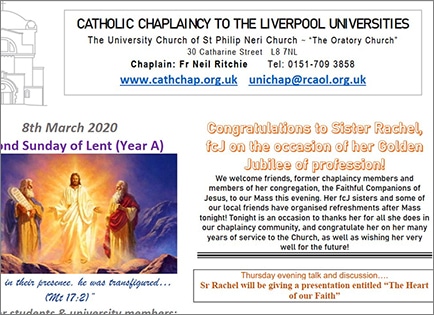 It seemed amazingly providential that I was able to share my anniversary with the student community just in time before the corona virus lockdown. On Sunday March 8 we were all so happy together, and on Sunday March 15 all were in dismay and disarray as both universities had just announced suspension of all face to face teaching for the rest of the academic year. The student who leads the music group and played the organ on March 8 had already departed to her home in the Czech Republic. Many others had gone too or were off in the next day or two; there were many affectionate and sad goodbyes, especially for our final year students who could never have expected their farewell to university life to be so sudden and abrupt.

Every Sunday in our chaplaincy we have a one-page bulletin to highlight events in the week ahead, and on the reverse a reflection, usually written by the chaplain or chaplaincy assistant.  I asked if on this occasion I could write the reflection that I am sharing here with you.

On this day, March 8, 1970, not quite 21 years old, I gave my life to God in religious life with Sisters Faithful Companions of Jesus. (My final profession was six years later, August 15, 1976)

50 years later, I find myself here with you. Before I returned to the UK from Indonesia in November 2011, my fcJ European Area leader phoned to ask how I would feel about giving some support in the university chaplaincy, as the previous sister had withdrawn because of failing health. I didn’t know how I would feel but was happy to find out, and here I am still.

And how on earth did I get to be a religious sister? What’s it about? Why does anyone make such a choice? Hard to say in a few words. When my seven year old niece asked me why, I tried to make it simple and replied, “Well, I suppose I wanted to live closer to God.“Of course, she followed that with another “Why?” And I: “I suppose… because God is love.” Of course, how my desire first began and how it grew would be a much longer story, but essentially that’s about the heart of it.

My sister and brother both dropped Sunday Mass in their teens. I wonder how come they did but I didn’t. I was continuously in a church choir from the age of nine, and that helped. I was also intensely affected by the beauty of the natural world, and somehow that helped. Every summer we spent two weeks with my maternal grandmother near Macclesfield, in a semi-rural setting, definitely “the country” to us town children, and I recall one summer when I was 8 or 9 and it must have been a very good summer with one glorious morning following another, and I always got up as early as I possibly could, to go outside long before anyone else was awake, to be utterly fascinated by the beauty and above all by the stillness. I couldn’t get enough of it. I didn’t connect it with “God” right away, but later I remember thinking: When they keep talking about God, this must be what they mean? This quiet, powerful, even slightly scary, strange something I sense in the early stillness, that delights, thrills, compels me, pulls me out of bed when everyone else is still peacefully sleeping?

Little step by little step, God got under my skin.

My favourite primary school teacher taught us how to pray after Holy Communion, using the word ALTAR: adoration, love, thanksgiving, asking, resolution. He also said, “Just imagine if there was only one place in the whole world where Mass could be offered, how everyone would be saving up all their lives so that just once in their lives they could go there and receive Our Lord in Holy Communion, but for us, because it is so easy, we don’t appreciate it.” I began to pray. It began to mean something to me. I don’t know how or why. Little by little, on and off, in so many little ways, God built upon the foundation he had begun.

To be a religious is a rare but possible gift. When I told my childhood friends next door of my plans, their Aunty Joan who was there said, “Well, all I can say is someone’s lost a lovely wife and a lovely mother!” I still remember that as one of the nicest things anyone has ever said to me. It isn’t that I wouldn’t have liked to be both of those, but it seemed unfair to marry someone if my greater desire was elsewhere. I sensed God was, nothing else could compare, and religious life offered me a way. And the vows – they sound such cold, boring, old-fashioned words. Yet chastity is about love, committed and faithful; poverty means sharing the freedom of Christ’s attitude to material things; obedience means listening for God’s guidance, as Jesus did. Community is about supporting each other in all three. Religious life aims to free us to live fully our baptismal consecration. But God has no favourites. We are all created in Christ, by Love, for Love. The question that matters most in life is what form of life will best allow me to do that – love God and love my neighbour. Read – a paragraph a day – Pope Francis’ Gaudete et Exultate: On the Call to Holiness in Today’s World – free download!

Holiness means union with Christ. He is the vine, we the branches. God has given us Pope Francis today to teach us what holiness really means and how to grow in it. Pope Francis says: ‘May you come to realize what that word is, the message of Jesus that God wants to speak to the world by your life’ (#24).

I am amazed at and grateful for my religious vocation. But there is no monopoly on holiness. Perhaps God just saw me as one who would need a bit more help?