Service with a difference… a tale of two knitters networking!

Francis wrote a few years ago while living in the FCJ Community in Calgary: Although my mother was an excellent knitter I did not follow in her footsteps. It was not until two years ago, when I was leaving one place for another and was feeling a great loss of friends that I began to knit. I was thinking I would be sitting in a room with nothing to do when my very best friend, who has a weekly knitting group, put two needles in my hands and I was started on a prayer shawl. I was shown the knitting skills of plain and pearl stitch. When I managed two prayer shawls I was given the pattern for these comfort dolls.

In 1990, a soldier on duty in Croatia wrote to his mother for some small toys he could carry in his pocket to hand out to the children. She began to knit little dolls to give her son whose nickname was Izzy to hand out to the children. Her son was killed and the soldiers wrote to his mother to continue the dolls and they would hand them out in Izzy’s honour.

Another man who made trips to Africa visited the Bondo Orphanage, which serves 10,000 orphans. The orphanage is run by ICross, a non-profit organization based in Ireland with chapters in Canada, England and Tanzania.

From this encounter a man began gathering medical supplies for overseas and some of the supplies included medical equipment for Africa. These dolls were used as packing for the equipment. The dolls were given to the children, for many of whom, this gift was the only thing a child owned. They brought great joy and comfort to the children. Many of the children have died and the doll has been buried with them.

Our knitting groups undertook to make this a special project for Africa and they also make little sweaters for the children in Bolivia. Each knitting evening the group end their time with a special prayer which includes a blessing for any finished item. I am happy to help and to be part of this knitting group and to feel that our dolls are a great source of joy and comfort to many disadvantaged children.

When Claire fcJ was visiting in Sacred Heart Convent, Calgary, she found that Francis had been making dolls for Africa for many months. Claire asked for a copy of the knitting pattern and gave it to Sr Stanislaus fcJ who was in the Redriff community at Broadstairs. (Download the pattern here.) 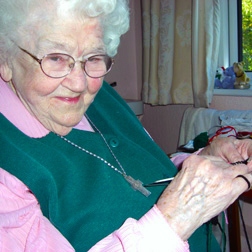 Sr Stan was a great knitter: knitted cribs were one of her specialties and Dolls for Africa became another.  Stan used the ends of wool for the dolls and mixed and matched the colours beautifully. Stan made over 220 dolls which were sent to various places in Africa, including Kenya, Mozambique, and Cameroon.