Spring and Summer in Salta

This post is a portrait of life in the FCJ community in Salta, a city in the North West of Argentina, at the foot of the Andes mountains. The community is located in barrio Solidaridad, a poor area of the city. Two FCJ sisters, Marguerite and Paula, live there with Sr Edith, a La Retraite sister, and Sr Sara, a Franciscan Missionary of Mary.

The bright yellow lapacho (also has white and pink varieties) is native to Argentina and other nearby countries. Its appearance in early spring delights the eye after a long winter of little or no rainfall when all else is dry. The flowers precede the leaves. The flowers of the lapacho, in addition to being ornamental, were previously used to counteract throat infections – The bark in infusion aids healing of cuts and other wounds. 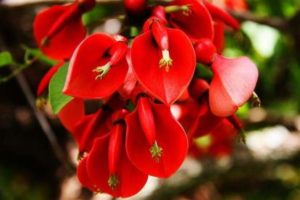 El ceibo is the national flower/tree of Argentina – a very big tree which, in springtime, delights us with its bright red blossoms. Five ceibo leaves per bottle of water, can be used to heal cuts and sores, stops bleeding. The bark, boiled (no more than 3 minutes) in a litre of water is a proven remedy against convulsions, cramps, nervousness, colic, and neuralgia. Tea made from the bark is a remedy for diarrhea.

The month preceding the Feast of Our Lord and the Virgin of Miracles (13-15 September) is busy with pilgrimages from the many corners of this vast Province. Our parish, Santísima Trinidad, participated in two such pilgrimages (3 to 4 hours walk from our church to the cathedral). This year, a new law aiming to separate Church and State, prevented the traditional visits and Masses at the Cathedral for students from the many national and private schools in Salta… However, numbers grew on the day of the procession when it seems that the whole of Salta turns out to celebrate the protection of God against earthquakes and other tragedies.

We always groan when another parish bingo is announced, because we are given bingo cards to sell! But we have to acknowledge that without this massive fund-raiser, the Santísima Trinidad parish would not be able to maintain itself nor build the much needed classrooms. At present the fund is growing toward the extension of the main body of the church.

Marguerite and Edith collaborated with the Celebration of the Word each night of the Novena to our Lady of Guadalupe (patroness of the Americas). A very heavy rainfall on the last evening didn’t dampen the spirits of the devotees. The streets became rivers, but ways were found to arrive at the hall for the final devotions, food, and a raffle. This hall near the FCJ community is one of three mission centres in our enormous parish, and is used mainly by the catechists for their work with children and youth.

Christmas Nativity Play: This year it was the youth group in our parish which presented a very well prepared Nativity Play, but the novelty for us was the Christmas Story featuring a group of very talented members of the Salta Police force. The Police prepare a beautiful crib scene in the park in front of their headquarters downtown, but this year they combined a moving live representation of the Christmas story, with lively traditional dances expressing the joy of humankind. The ‘police troupe’ has been visiting many barrios in our city. The performance was spectacularly beautiful and moving, made even more touching by their choice of site in our barrio: near our house where a month ago a young man was killed by a couple of drug dealers, leaving a widow and two little ones.

A substantial amount of food was donated to the parish Caritas for the purpose of giving care packages to needy families for Christmas. Paula and co-workers were able to prepare and deliver all of these surprises on the Saturday before Christmas. Each package included a Christmas cake prepared by a small group of women from the parish. The afternoon snacks program also benefited by these delicious panetones. Edith and her collaborators were able to delight the children in one of the squatter settlements with a Christmas feast of hot chocolate, Christmas cake, plus singing and dancing.

Sembrando Esperanza, the NGO with which we have worked closely since our early days here in Salta, celebrated fifteen years of having received juridical personhood this year. As well as being a centre to facilitate integration in the local public schools, it offers workshops for adults and young people who need to learn a skill, and supports them in the process of finding employment and of forming a working group, such as a cooperative. The project is called Abriendo Caminos (Opening New Roads).

The Marie Madeleine Popular Library, which Sembrando Esperanza initiated in 2010, has gone through a difficult time in order to keep the paperwork and burocratic tasks in order, but the president of Sembrando Esperanza and Sr Marguerite are trying to get the library on its feet again.

The Governor of the Province of Salta, Juan Manuel Urtubey, who aspires to be the President of Argentina, decided to donate his salary as Governor for one year to eleven different associations which work with children with handicaps. Sembrando Esperanza is one of these.

November also saw renewed activity in the anti-trafficking group, Red Kawsay, with an evening of handing out pamphlets in one of the central parks. This park is not only famous for the families who gather to enjoy an outing, but also for the women who are being prostituted in the area. Our little effort is meant to be a warning to the ‘johns’, and a way of alerting the general population to the dangers posed by this crime – especially to youth and children. As part of our local Kawsay work, we collected personal hygiene material in three parishes to make up gift bags for women in the Salta ‘shelter’ for trafficking victims.

In mid November Srs Edith and Paula represented Salta in the lively and very informative Annual Assembly of anti-trafficking groups from NW Argentina, part of  the Kawsay Network organised by the Conference of Religious of Argentina). There are now six such groups in this zone, all working to inform/warn the public. In addition to some excellent input, we enjoyed the innovative, creative ways which each group uses to convey the message and information to the general public. A big plus was the side-trip to one of the most beautiful spots in the country: the seven-colour mountain of Northern Jujuy.

Sr Edith, and her pastoral visiting companion Rosa, one of our Companions in Mission, have added San Justo, another squatter settlement, to their list of parish areas which receive this important support – seeking out and visiting the sick. Meanwhile, Edith is supervising the building of a community hall in a new and growing settlement near our house (San Francisco). With the financial help of the parish and the Archdiocesan Caritas, Swiss and French friends, and a generous group in our parish, the building will be almost finished in time for the New Year. Many of the people who live in this settlement have donated time to help with the building. The ‘afternoon snacks’ for the children continue – also with the support of Caritas and the animation of Edith.

Srs Paula fcJ and Edith, LR, directed a number of retreatants from 17-25 September in a very beautiful country home (lent to us) situated in the foothills. Excellent spring weather, combined with abundant graces made the experience a blessed one for all.

The Companions in Mission directed by Paula and Edith, made their annual silent retreat, enjoying the beauties of the foothills, the birdsong, and the wooded shady walks … and were amazed by an incredible hailstorm which unfortunately destroyed many of the crops in the area. Stones the size of golf balls bounced high off the ground as they hit. Everyone who participated in the retreat went home, if not totally changed, transformed a little… and very happy with the experience. Sr Edith, LR is to become an honorary Companion in Mission. She already shares our spirituality and our mission, and has directed several of the group in their annual retreat.

Srs Marguerite and Paula, along with the eleven CiMs held a meeting with prospective new members. During 2019, while the seven newest CiMs will engage in the Spiritual Exercises in daily life (19th annotation) guided by Paula and Edith, Marguerite and the four more senior CiMs will lead the prospective members in their formation sessions. Please keep us all in your prayers.

Sr Sara left us at the end of September heading to her new mission near Buenos Aires. Sara is a Franciscan Missionary of Mary who has shared community life with us since March. Her presence with us has  brought a Franciscan flavor to our community spirit, as well as Bible expertise shared generously in the parish, and some delicious Portuguese dishes here at home!

On Christmas eve, after a beautiful Mass in the parish, we came home to welcome a few visitors whom we had invited to share the midnight meal with us. At the last minute an extra four people were added to the group, stretching our faith in the power of prayer to multiply food, and stretching the capacity of our kitchen. In the end all was well, and once again we discovered that generosity and hospitality bring many blessings our way.

On Dec. 28th we shared a meal with the Franciscan Missionary Sisters of the Blessed Sacrament. One of their members, Vanesa, works closely with Paula and Edith in the anti-trafficking efforts, and the community always welcomes us to their home for the Kawsay meetings.

May this coming year bring the same peace and joy we experienced upon witnessing once again the coming of the Newborn, and may He take precedence in all things.

What is Vocation – A Video

Advent: Season of Hope and Promise

The FCJs in Yogyakarta: Life During Lockdown - Faithful Companions of Jesus

FCJ sisters in Yogyakarta, Indonesia, have worked with local parishes and governments to send food parcels to families and individuals in need during the COVID-19 pandemic lockdown.
View Comments