In the face of the social and spiritual needs of her time, Marie Madeleine saw the apostolic work of her Society to be education, retreats, missions and care of orphans. In that light of that inspiration, the first Faithful Companions of Jesus, beginning in Amiens, played their part in the movement towards social change in France, before moving on to other parts of Europe and overseas.

Marie Madeleine saw her vocation to be contemplative in action. Looking at the wretched conditions in which so many people of her time lived and worked, she saw that love of God and love of neighbour were inseparable. The words of Jesus, I thirst, heard in prayer, became the motivating force of all her undertakings. The new congregation came to birth on Holy Thursday 1820 in Amiens, France. Harsh deprivation and pressing human needs provided the fertile soil in which it took root and began to grow.

It is thought that the first members of the Society of the Faithful Companions of Jesus were fourteen in number, but we know the names of only seven of them: Louise Legrand, Louise Melaut, Honorine Moreau, Louise Delaruelle, Marie Lenssens, Anna Ravon and Julie Guillemet. 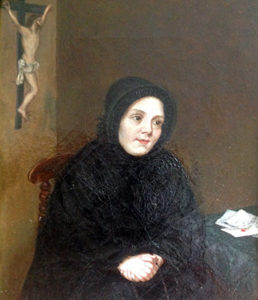 Born in ChÃ¢teau-Thierry (Aisne) in 1807, Julie was idolised by her parents and was, for many years, their only child â€“ she was 10 when her sister ClÃ©mence was born. She showed signs of genuine holiness from the age of four, and, at six, consecrated herself to God, with the intention of entering Carmel when she was old enough. It was when the Guillemets settled in Amiens that Julie met Marie Madeleine who invited her, young though she was, to join her in teaching the poor children who came daily to the little house in Amiens which she had made her base. Through this contact, Julie began to know and appreciate the spirit of the Faithful Companions of Jesus, and her generous response showed a spiritual maturity beyond her years. When Marie Madeleine fell seriously ill in 1821, the doctors gave her a year to live. Julie was only 13 at the time, but the Foundress entrusted to her the nascent Society, and Julie accepted this trust. Marie Madeleine recovered from her illness, and Julie was admitted to the Society a year later.

She spent some years in Amiens, but was then sent to England, where she spent 28 years. An anonymous archival document states that much of the early success enjoyed by the Society in England was due to Julieâ€™s winning personality. Though timid, nervous and highly sensitive, her naturally cheerful disposition seemed to inspire universal confidence, affection and esteem. She had many difficulties in England, but she coped with them with great wisdom and prudence, being humble and unassuming with everyone, taking advice, acknowledging her ignorance of things and her inexperience, when necessary, with the most refreshing candour and simplicityÂ (Martin: Life of Marie Madeleine de Bonnault dâ€™HouÃ«t).

Read more about the history of the Faithful Companions of Jesus in Britain.

Julie watched over the development of the Society in North West England, and when the first foundations were made in Ireland she was given overall responsibility for those houses too. In March 1858, she fell seriously ill with rheumatic fever and had by no means recovered when a message arrived with the news that Marie Madeleine was dying. She travelled to Paris, and was present when the Foundress died on 5 April. Less than a month later, Julieâ€™s own death, at the age of 50, took everyone by surprise. A heart condition, aggravated by grief at the death of Marie Madeleine, led to a fatal heart attack. Julie Guillemet died on 30 April 1858, having outlived her much-loved friend in the Lord by 25 days.