A birth in a time of trouble and uncertainty …

The political and social climate in France in 1847 was anything but favourable to religious congregations.  Despite a decree prohibiting the establishment of further religious communities, the Archbishop of Paris, Monseigneur Affre, who had known Marie Madeleine when he was a priest in Amiens and was her friend and a supporter of the Faithful Companions of Jesus, warmly welcomed the Sisters to his Archdiocese. 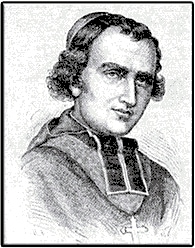 It was not a sudden impulse that directed Marie Madeleine to Paris.  She had considered the idea for some time. A house in the capital would provide the opportunity to work with the poor,  be a pied à terre for herself and her sisters on their frequent journeys, and provide a more convenient administrative centre for the Society.  Further, it could become her place of residence when she was not visiting the houses.

It was January 1848 when Marie Madeleine bought the Paris property and political tension was high.  The unrest of subsequent months culminated in a revolution that summer. There were violent clashes in the streets, many deaths and much sorrow. In July, Monseigneur Affre lost his life in an heroic attempt to bring peace at the barricades.  Marie Madeleine wrote, From time to time, just when the need is greatest, God raises up a protector for us; he then withdraws him, leaving us again without human support. Monseigneur was our one support in Paris.

In the months following the summer Revolution, Marie Madeleine remained in Paris to care for the children in greatest need. She washed, dressed and fed them. To those advising her to spare herself, because of her age and poor health, she gave a characteristic reply: We should work not as ladies to pass the time but as do the poor to earn their living. Having experienced life as a lady she was able to appreciate the difference!

Throughout the political unrest the Sisters worked for the poor of the district. Eventually a school was established, together with an administrative centre and a novitiate.   The house became Marie Madeleine’s residence and she lived there between her visits to the other houses in France, as well as to those in Italy (Savoy), Switzerland, Ireland and England.

The Paris house was born amidst great political unrest and uncertainty, and Marie Madeleine always encouraged her sisters to have a special regard for this house.  It was here that she died on April 5th 1858.

To this day, the room in which she died is preserved as a place of prayer and pilgrimage. Beside her room is a small museum containing things precious to her memory.

Marie Madeleine’s room in Paris, the place where she died

Travelling from Issoudun to Bourges you normally  (though not inevitably) enter the city over Pont d’Auron and it is from this bridge that  Notre Dame du Pont, the statue preserved in Marie Madeleine’s room in Paris (and shown at the bottom right), takes its name. Originally it stood in one of the niches in the bridge. Rescued by M de Bengy to prevent desecration, it was later given by him to Mére Legrand around 1827/8 and taken to Châteauroux.  It was there that in 1830/1 Mère de Courville experienced it weeping.  Since that time its journey has taken it from Châteauroux to Turin, Carouge and finally Paris in 1850.

Click on the images to see their captions and take a tour of the museum.

Death of our foundress, Marie Madeleine