Journeys in life and death: An Historical Perspective

The Venerable Marie Madeleine d’Houët made many journeys in her lifetime visiting the houses she had founded in different European countries. She died in Paris in 1858 and was buried in Gentilly, Paris. What could not be foreseen at the time was that in 1904 it would be deemed necessary for her body to be moved to England, first to Upton in the Wirral and later in 1980 to Broadstairs in Kent. And there was still another journey! For on September 22nd 2012, amid great rejoicings, her remains were returned to Paris, to the church of St. Dominic.

Marie Madeleine died at rue de la Santé, Paris, April 5th 1858 and in accordance with her wishes was buried at the FCJ orphanage at Gentilly in Paris. Even before her death she was known as a holy woman and within the next ten years people started jotting down their memories – mostly for the young women coming to the FCJ Society who had never had the opportunity to know her.

Then in the summer of 1873 Mère Josephine Petit, the Second General Superior, asked all the Sisters who had known the Foundress to write down what they knew of her life. The following year, Cardinal Guibert, Archbishop of Paris, asked P. Apollinaire de Valence to draw the information together, which he did between 1875 and 1878. With ‘scrupulous attention (he) studied 20,000 documents and the written depositions of 300 witnesses.’

The French religious troubles of 1880 interrupted the process and it was not until 1886 that Cardinal Richard, who had succeeded Cardinal Guibert, sanctioned the establishment of an ecclesiastical tribunal in Paris for the examination of witnesses bearing testimony to the heroic sanctity of the Servant of God. This is normal practice when the Church begins to examine the life of a holy person with a view to their being declared a saint.  (This process is called a ‘cause for canonization’.) 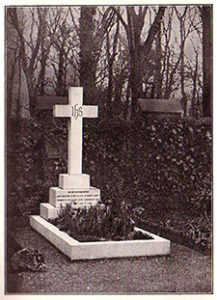 Because Marie Madeleine d”Houët had travelled so widely, and was known to so many people still alive, distance necessitated the establishment of subsidiary tribunals in France and elsewhere. Eventually, when the testimonies (a compilation of the evidence about her life) were presented to the Church, they were accompanied by letters of support from no fewer than 14 Cardinals, 33 archbishops and 127 bishops from around the world. So far, so good!

However, as the twentieth century dawned, governmental policy in France became less and less favourable to Catholic schools. In 1904, the radical socialist government of Emile Combes, very hostile to the Catholic Church, forbade the activities of all catholic teaching religious congregations, even those with legal recognition. In other words the ministry of Catholic teaching was forbidden in France and eleven FCJ Schools were forced to close.

Like their men and women religious compatriots, the French Faithful Companions of Jesus were obliged to leave France, taking refuge in Belgium, Switzerland and the Channel Isles. So, in June 1904, unsure of what would happen to the house and gardens at Gentilly, it was decided to transfer Marie Madeleine’s body to the safety of the then Provincial House at Upton Hall Wirral, England. Here it rested in the quiet cemetery in Upton’s beautiful garden for close on 76 years.  (For a handwritten account of the transfer of her body to Upton, click here. For a full account presented by Mary Campion McCarren fcJ to the Diocese of Shrewsbury History Day, October 3rd 2009, click here.)

Prayer for her canonization continued but it was not until 1970 that the heroicity of her virtuous life was recognized by the Church and the recommendation made that her body be transferred to a place of worship where the faithful could come on pilgrimage. So in 1980, the body was transferred to the chapel at Stella Maris, Broadstairs Kent. (Stella Maris was officially the Generalate from 1961 to 2012.)

Now, in 2012, and again with full ecclesial support and encouragement, Marie Madeleine’s remains have been taken to the Church of Saint Dominique, rue Tombe Issoire, in the very neighbourhood of Paris where she lived and died.

Whilst her mortal remains rest in the Lady Chapel in a simple reliquary, her spirit lives on. The metalwork of the reliquary depicts the flames of Pentecost, an appropriate symbol for this Gospel Woman who was truly a faithful companion of Jesus.

Marie Madeleine was daughter, sister, wife, widow, mother, foundress and religious sister.
She is truly a woman for our time!

We continue to pray for healing through her intercession and to promote her ‘cause’.  For more information, click here.

How does one become a Saint?

As a way of sharing compassion, especially during these challenging times, the Yogyakarta community frequently hang simple packages of food on their fence with a remark, “Free groceries. Please take it if you need it.” Read more... ... See MoreSee Less

An Offering from a Poor Widow - Faithful Companions of Jesus

As a way of sharing compassion, sometimes we hang simple packages of food on our fence with a remark, “Free groceries. Please take it if you need it.”
View Comments