History of the Faithful Companions of Jesus in France

History of the Faithful Companions of Jesus in France

The French origins of the FCJ Society

‘This little Society’ as Marie Madeleine, foundress of the FCJ Society, loved to call it, has spread far beyond Europe. In her own life-time she made foundations in five European countries and now there are FCJs in Asia, Australia and the Americas too. But no matter where there are Sisters, the French origins of the Society are never forgotten and the works started there are seen as the prototype of all our missionary endeavours.

The first FCJ house, the ‘cradle of the Society’ is in Amiens, very near the wonderful Gothic Cathedral.  It was purchased by Marie Madeleine d’Houët, foundress of the Sisters Faithful Companions of Jesus, in 1817. It is on a street that used to be called ‘rue du Puy vert’, known today as ‘rue Dupuis’.  For many years there was a boarding school here but today the former school building is used for homeless people under the auspices of the Social Services of the town of Amiens. A statue of St Philomena still dominates the chapel building on the corner of the street.

The original house, ‘the cradle’ is a place of pilgrimage.  Those who visit say they leave with renewed strength, transformed and energized for the greater glory of God.

Read about the beginnings of the FCJ Society in Amiens.

Marie Madeleine was a pioneer in the education of girls, and established a boarding school for them at 18, rue de Gigant.  Over the years and throughout its history, the boarding school has known many changes.  Today it is a co-educational kindergarten and primary school, École Saint Michel. The children and their parents appreciate their school and its lovely chapel, just restored; all this in a green area in the centre of the city, something that is quite exceptional.

This is a gallery of photos of the chapel windows.

In later years a small community of FCJ sisters lived for a few years with a Fraternity of students at ‘rue de Boccage’. In this lovely setting, these students found a warm welcome as well as the support and peace they need for their studies. The sisters were involved in spiritual accompaniment, retreat work and parish ministry. 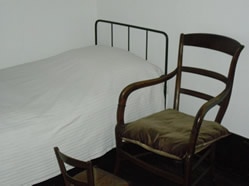 Marie Madeleine started a boarding and day school for young girls, on the street known then as ‘rue de Lourcine’ in what was Sector V of the city of Paris.  This is where the Foundress spent the last years of her life and where she died in 1858.  The foundation predates the ‘La Santé’ prison which is just is across the road from the property.

An FCJ community still lives in the Paris house.  The room where Marie Madeleine died has become a place of prayer and of pilgrimage. The small museum beside it holds things precious to her memory. 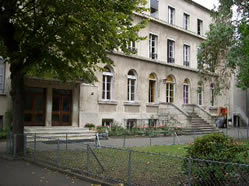 The school established in 1847, Notre Dame de France, continues to thrive.  Compared with La Santé prison across the road, the school and its grounds are like a little bit of heaven.

A small FCJ Fraternity in Rue Falguiére has until recently welcomed students from all over France. The personal touch, training in group living, and spiritual support have all been part of the day in this ‘foyer’.

Other FCJ houses in France

Marie Madeleine opened other houses in France. For various reasons some were closed during her lifetime, others were closed by the national government. … ‘In 1904, the radical socialist government of Emile Combes, very hostile to the church, forbade the existence of all catholic teaching religious, even those who already had legal recognition.  Like their men and women compatriots the French Faithful Companions of Jesus were obliged to leave France, taking refuge in Belgium Switzerland and the Channel Islands.  The French schools had to close.  In 1921 the resumption of relations between France and the Holy See (they had broken off in 1904) brought a certain relaxation; religious congregations were from then on officially tolerated before being once more legally recognised by the Vichy government in 1941-2, a recognition which was confirmed by decree, at the liberation, by the government of General de Gaulle.’ (p 63, Marie Madeleine Victoire de Bonnault d’Houët by Michel Schepers.)

In acknowledgment of the work of the Foundress, Marie Madeleine d’Houët and of the innumerable FCJs who lived and worked in these places we list some of these foundations: 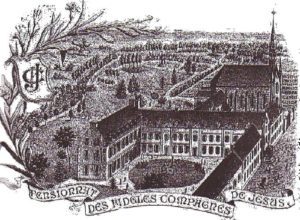 Ste Anne d’Auray is a village three miles from the town of Auray in the diocese of Vannes, Morbihan, Brittany. Famous for its pilgrimages or ‘pardons’ in honour of St Anne, until Lourdes grew in popularity Ste Anne d’Auray was the most favoured place of pilgrimage in France. A vibrant centre of prayer, to this day it continues to attract numerous pilgrims. The Venerable Marie Madeleine d’Houët, Foundress of the FCJ sisters, wanted her Society to be involved in retreat work and Ste. Anne d’Auray was an excellent place for this ministry.  Here, with the support of the Jesuits, she established a retreat centre and subsequently developed it as a novitiate and generalate.

The first Sisters arrived in 1825 and established a community in a little house in the courtyard of the church. The accommodation was so cramped (it had one room at ground level and an attic) that the sisters  had to receive people in the sacristy of the church.  Their life of poverty made a deep impression on the local people.

In 1826 a house and chapel were built on the property. The Sisters gave lessons to the village girls and to enable the retreat work, half of one of the floors of the house was divided into small rooms to accommodate retreatants. Marie Madeleine made several visits during this time and made an eight day retreat before her departure for Rome in 1826. The Sisters received much spiritual help from the Jesuit Fathers.

Shortly after their arrival, the sisters set about clearing land to create a simple garden.  In time this was transformed into a magnificent park-like grounds.  The kitchen garden and meadow with their well laid out paths abounded in fruit trees, shrubs and flowers.  At the bottom of the meadow flowed a little river crossed by three little bridges given the names of the Holy Angels, St Anne and St John.  They owe their names to Father Ferdinand Jeantier SJ, a much loved protégé of Marie Madeleine, who was a frequent visitor.  A lake called Genesareth on the outskirts of the little wood completed the idyllic scene.

In 1833 Marie Madeleine had the joy of giving the habit to nine new novices. The candidates continues to arrive. In 1863 alone, thirty one postulants received the habit and thirty novices pronounced their vows.

During these early years Marie Madeleine sent the sick of the Society to St Anne’s either to recuperate in the good air or to die surrounded by loving care.

In 1888 Mother Josephine Petit died at Ste Anne D’Auray. Mother Josephine had replaced Marie Madeleine as Superior General in 1858. She worked tirelessly for the Society and for the thirty years of her generalate her ‘home’ was St Anne’s which she dearly loved. Mother Marie de Bussy who replaced Mother Josephine also made her base in  St Anne’s and loved its peace and happy atmosphere.

The house and school at Ste Anne were known to be places of joy and peace, but at the turn of the century anti-religious laws came into force. In the summer of 1903 the sisters learnt of the imminent danger to the religious of Catholic Brittany. In fact because of the new legislation, some religious were having to leave their convents to seek accommodation elsewhere or to return to their families. Within three short years the FCJ Sisters and the students of Ste. Anne’s had also to leave. 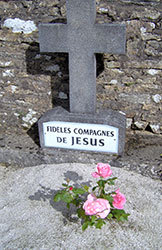 1905 saw dark clouds over St Anne’s. February 21st was planned as a day of celebration for the new bishop’s entry into his diocese but government officials chose that day to descend on the basilica of St. Anne to make an inventory of its contents. 20,000 Bretons gathered to defend their basilica. The officials were forced to retreat and the bishop’s arrival was deferred to March 13th when he came by nights.  On Easter Sunday 1905 an FCJ novice pronounced her vows and that was to be the last such ceremony for almost twenty years at Ste Anne d’Auray.

In February 1906 the Edict of Closure arrived and in September, on the Feast of the Exaltation of the Holy Cross, the boarding school and novitiate were emptied. The sisters were full of trust in God; the final words of the 1906 annals are Laus Deo Semper.

In 1919 some sisters returned to oversee repair work on the community house, the only part of the property they were allowed to occupy. In September 1919 the novitiate reopened and in 1922 the first ceremony of clothing and profession took place. However, in 1925 the novices left St Anne’s to the great sorrow of the community. Moreover attempts to re-establish their ministry were unsuccessful and the FCJ sisters decided to withdraw.

1929, the last year at St Anne’s, proved very difficult.  Since there were no pupils, the house was deprived of water, fire and light during the harsh winter.  Water had to be fetched from the pump in all weathers and their only light was supplied by oil lamps placed in the Chapel and the Common Room.

There was a Mass of thanksgiving in the Basilica of St Anne for the one hundred years of devoted service of the Faithful Companions of Jesus. When all was in readiness the keys were handed over to the Daughters of the Holy Spirit who were replacing the Sisters and on the morning of September 21st 1929 the FCJ sisters left St Anne’s for good.

The convent subsequently became known as Ker-Anna (Breton for House of Anne) and is now a care home for the elderly and infirm Daughters of the Holy Spirit.

When the present chapel was built in 1876, students in various FCJ Boarding schools donated the windows.

The Faithful Companions of Jesus greet the Sisters of the Holy Spirit.
For the last eighty years they have ministered at Keranna.
They tend the FCJ graves and always extend gracious hospitality when FCJ sisters visit.
It was they who gave the beautiful photographs used to illustrate this article.