The following is a brief account of the departure of the FCJ Sisters from the Convent in Bunclody, Co. Wexford, which was shared in the local media as the sisters were unable to have public celebrations at the time. This piece was written by Sr Bríd Liston fcJ, Leader of the Area of Europe, on behalf of the FCJ Sisters

In 1861 when the FCJ sisters first arrived in Bunclody they took charge of the girl’s primary school. It is known from an advertisement placed in The People newspaper, five days after the arrival of the Sisters, that they immediately opened a boarding school for girls. Within four years they had 54 boarders and 10 Sisters in the community. From the beginning of the FCJ presence in Bunclody, the gospel values of companionship, deep respect for each individual, justice, integrity, faithfulness, excellence, gentleness and compassion, as lived by Marie Madeleine, the foundress, were foundational to the life of the schools. These values have been handed down from generation to generation and have always remained central to FCJ education.

In 2009 the FCJ Society handed over the Trusteeship of the school to the Le Chéile Schools Trust with the confidence of knowing we had such a fine staff to carry forward this FCJ tradition in education.

This year, the FCJ Sisters mark the Bicentenary of the Foundation of the FCJ Society by Marie Madeleine d’Houet in 1820. In closing the Convent, we have deep gratitude and joy, knowing the work of education, that the Sisters began all those years ago, is continuing in such competent, professional, and caring hands. 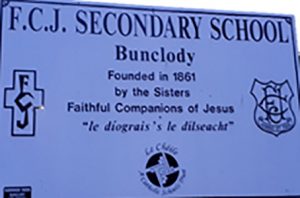 As we leave, we remind staff, students and parents of the school motto: Le díogrias ‘s le dílseacht – Companionship with Fidelity. In a world where many things are possible, we ask you most of all to be kind. Yes, work at gaining the best result you can from education, but be a friend, a companion, to the person beside you, to the people you meet each day. Life is fragile and it can change in a split second. We need each other. We need to watch out for each other, and we need God in a life that is transient and vulnerable.

As a school of the Le Chéile Schools Trust, the FCJ Society entrust to each one of you
Our Name, Faithful Companions of Jesus, our greatest treasure,
Our Home, The FCJ Convent, and
The FCJ Secondary School, Bunclody.

And may the bright light of the FCJ Secondary School be as blest as it was in its past. Shining still with radiant light – brightly beaming to the last.

Read this piece as it appeared in The Nationalist, Carlow. For more on the history of the FCJ Secondary School Bunclody (1861 – 2009):